World Ozone Day 2022 has been celebrated globally since it was first proclaimed by the United Nations (UN) General Assembly as the International day for the Preservation of the Ozone Layer and in commemorating the date of signing of the Montreal Protocol on September 16, 1987.

It has become a platform that highlights the need to act in collaboration, forge partnerships and develop global cooperation in ozone protection while simultaneously addressing climate challenges to protect life on earth for future generations.

This observation was shared by Permanent Secretary (Planning, Land Use and Environment) at the Ministry of Development (MoD) Dr Nor Imtihan binti Haji Abdul Razak on marking World Ozone Day 2022 in November.

The permanent secretary noted that this year, the occasion carries the theme ‘Montreal Protocol@35: Global Cooperation Protecting Life on Earth’ and the slogan ‘Ozone for All’, which reaffirm the collective obligation of all member states party to the Vienna Convention and the Montreal Protocol to ensure that the ozone layer is restored and protected from the threat of gases that deplete the ozone layer (ozone depleting substances or ODS).

The negative effects of ozone layer depletion will increase the amount of ultraviolet (UV) radiation that reaches the earth’s surface, and thus can have a negative impact on health such as cataracts and skin cancer. 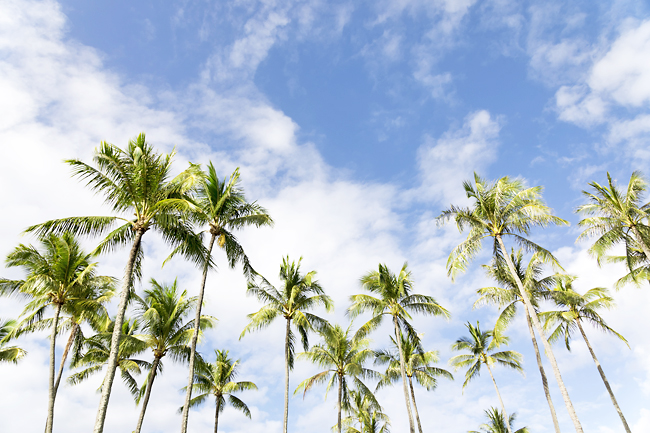 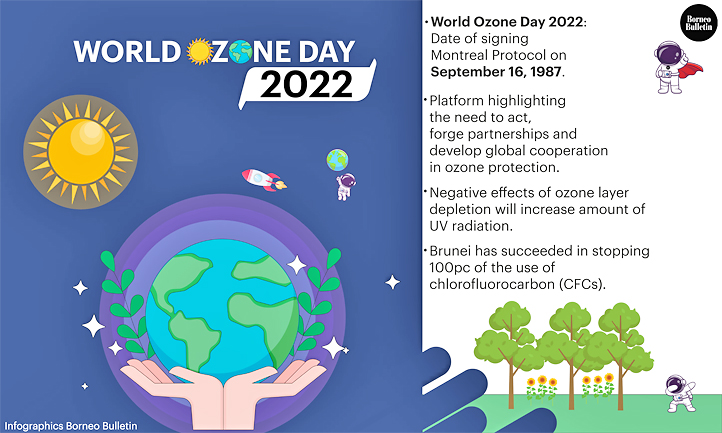 Since its first proclamation in 1995, the day serves as a channel for the public at large to get involved in raising awareness and take action in rehabilitating the ozone layers individually or in concert, at the national, regional and international levels.

The director said that the ozone layer serves as an important protective layer for the earth from ultraviolet rays by filtering it.

In the 1980s, a chemical was identified as ODS which thins the ozone layer which not only compromises the fertility of crops and destabilising the food chain, but also weakens the body’s immune system as well as increase risks of cataracts and skin cancer.

However, in its 35th anniversary this year, the Montreal Protocol has taken effect where the world now sees 99 per cent of ODS use being stopped and the ozone layer is expected to recover by 2060.

Since January 1, 2010, Brunei has succeeded in stopping 100 per cent of the use of CFCs as stipulated by the Montreal Protocol schedule and in the implementation of a phase-out reduction in the use of hydrochlorofluorocarbon (HCFC) gases by 10 per cent in 2015 and 35 per cent in 2020, and it is hoped that the country reaches its next target of 67.5 per cent in 2025.

This is achievable by carrying out programmes and activities to protect the ozone layer, in collaboration with the implementing agencies such as the UN Environment Programme and the UN Development Programme.

It was also shared that in 2016, the United Nations Framework Convention on Climate Change (UNFCCC) Secretariat had reported that hydrofluorocarbon (HFC), an alternative gas used to replace ODS, is a gas with global warming potential that can result in the phenomenon.

In a joint effort to overcome climate change, the Montreal Protocol introduced the latest amendment, called the Kigali Amendment, which enforces the reduced use of HFC gas that has a high global warming potential value and encourage consumers to choose ozone-friendly, environmentally friendly products which are climate and energy efficient.

This is said to be beneficial in avoiding a global temperature rise of 0.4 degrees Celsius.

In Brunei a guidebook titled Guideline for Safe Handling of Low GWP (Flammable) Refrigerants was produced. The guidebook outlines the safety measures in management and handling of alternative gas. It is intended to contribute to the preservation of the ozone layer and the climate, while making sure that the safety of users are guaranteed.

The guidebook came into existence with the involvement of key main agencies that play an essential role in the development and implementation of the guidelines.

JASTRe is the national governing body for any matters relating to the environment and responsible for the planning, formulation and implementation of the Montreal Protocol, including the establishment of regulations to support ODS phase-out activities.

JASTRe not only plays a high-level role in promoting policies to push specific agendas to the MoD, but is also responsible for the reviewing and approval for any application by importers/exporters of ODS (mandatory) and ODS alternatives (voluntary) and subsequently issuing the application permits (APs).

Meanwhile, the Royal Customs and Excise Department (RCED) plays an essential role in ensuring Brunei achieve its Montreal Protocol obligations by regulating the import-export of ODS and ODS alternatives through the enforcement of the AP system.

With no less important involvement, the Fire and Rescue Department (FRD) at the Ministry of Home Affairs (MoHA) is mandated to deal with matters pertaining to fire hazards and fire safety measures such as local transport and storage (fire certificate) which is in compliance to the Fire Safety Order, 2016.

The Department of Mechanical and Electrical Services (DME) is tasked with the vital role of assessing technicians that have completed flammable training courses that have been recognised from authorised bodies. However, the certification programme by the DME is only for refrigeration and air-conditioning (RAC) technicians working on government projects.

With the requirements of good quality buildings in place, the Authority on Building Control and Construction Industry (ABCi) is mandated as an authority to issue approvals for any building and construction works across all sectors. This also involves registration of products including RAC equipment upon endorsement by technical agencies.

ABCi also published the Building Guidelines and Requirements and the Industrial Development Guideline to promote good quality buildings which are structurally safe.

The Land Transport Department (JPD) ensures the licensing, safety and worthiness of the vehicles used on the road, which includes registration of car servicing and repairing workshops as being compliant to comply with requirements and standards under the LTD.