CARACAS (AFP) – Colombia’s government and the National Liberation Army (ELN), the last recognised rebel group in the country, resumed formal peace talks in Venezuela on Monday for the first time since they were suspended in 2019.

The talks are a push by President Gustavo Petro, who in August became Colombia’s first-ever leftist leader, and has vowed a less bellicose approach to ending violence wrought by armed groups, including leftist guerrillas and drug traffickers.

In their first meeting, the parties agreed to “resume the dialogue process with full political and ethical will”, according to a joint statement.

They added that the talks aim to “build peace” and make “tangible, urgent, and necessary” changes, highlighting the need for “permanent compromises”.

The first round of talks will last 20 days. Colombia has suffered more than half a century of armed conflict between the state and various groups of left-wing guerrillas, right-wing paramilitaries and drug traffickers.

The ELN started as a leftist ideological movement in 1964 before turning to crime, focussing on kidnapping, extortion, attacks and drug trafficking in Colombia and neighbouring Venezuela. It has around 2,500 members, about 700 more than it did when negotiations were last broken off.

The group is primarily active in the Pacific region and along the 2,200-kilometre border with Venezuela.

Dialogue with the group started in 2016 under ex-president Juan Manuel Santos, who signed a peace treaty with the larger Marxist Revolutionary Armed Forces of Colombia (FARC) rebel group that subsequently abandoned its weapons and created a political party. 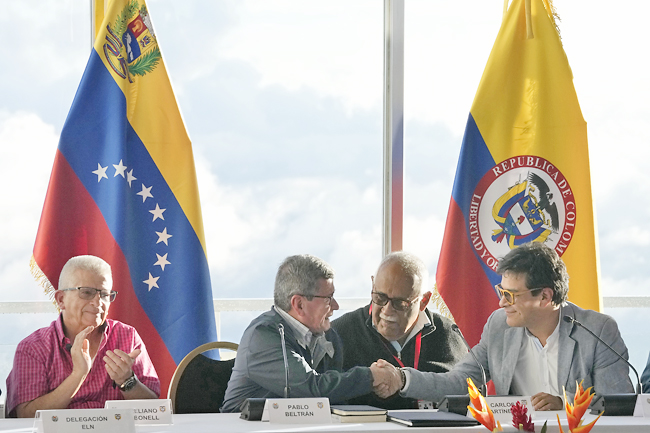