BOGOTA (AFP) – Faced with angry street protests and international criticism over his security forces’ response, Colombia President Ivan Duque is coming across as erratic and out of touch with a country in crisis, analysts said.

Since April 28, hundreds of thousands of people have vented their frustrations against the government after poverty and violence soared during the pandemic.

The trigger was a proposed tax reform that has since been withdrawn.

It’s not the first time Duque, 44, has faced social unrest against his presidency. In 2019, an unexpected student movement served as a warning.

After decades of stigmatisation against social protests, often associated with left-wing rebellions, young people who did not live through the darkest days of Colombia’s more than half century of armed conflict with Marxist guerrillas, have no qualms about demanding better living conditions. 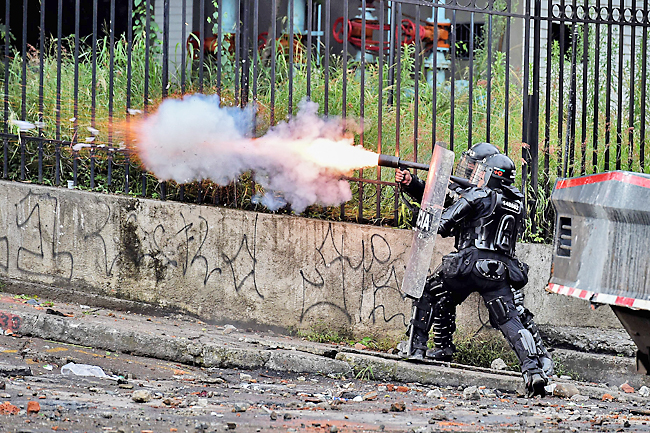 They’ve joined unions, indigenous people and others in taking to the streets recently in what have largely been peaceful protests.

However, some have descended into violence with at least 26 people dying and more than 1,500 injured – both civilians and security forces – according to government tallies.

The police response to the protests has come under fire from the United Nations (UN), European Union (EU), United States (US) and rights organisations.

Yet the government has insisted in its claim that the violence has been wrought by left-wing guerrillas and drug-traffickers infiltrating demonstrations.

Jairo Libreros, a political analyst at the Externado university, told AFP that Duque “seems to be isolated from reality”. Duque has proposed a dialogue with demonstrators but none of them were invited to the first talks amongst various government agencies and the business sector.

For Sandra Borda, from the Los Andes university, it was “a conversation between them and themselves”.

The president’s move to deploy 47,500 police and armed forces on the streets to “guarantee calm” has also gone down badly.

It managed only to “throw oil on the fire” and serves to “confirm the disconnect” between the government and the problems faced by the people, said Libreros.

Since the pandemic began, Duque has given few press conferences or interviews. Instead he has given nightly televised updates on the health situation, but those ended recently.

“It’s a bubble… it’s a closed circuit” with no possibility of debate, said Yann Basset, an expert at the university of Rosario.

And the disparity in death toll figures has left little confidence in the government’s official line.

Take the southwestern city of Cali: the mayor claims there have been seven deaths since the protests began but the public prosecutor’s office and Ombudsman’s office both said 15, the government said 16 and the Temblores NGO puts that figure at 35.

But for analyst Laura Gil, there are “so many videos” of police brutality that “the numbers hardly matter”.

“With the militarisation of the streets and police abuses… (Duque) has lost the support of the international community.”

There’s also a lack of faith in the separation of powers.

“The bodies tasked with looking after the safety of the people… are all security agencies coopted by the government that has named officials that are close friends of the president,” said Borda.

Whoever was advising Duque, the president failed to take into account the opinions of experts when launching his ill-considered tax hike.

“Everyone warned him…. that it wasn’t politically viable,” said Basset. “That shows the government’s inability to read the situation.”

The tax reform aimed to increase VAT and the taxpayer base but with the economy ravaged by the pandemic, poverty has soared to 42.5 per cent and unemployment is up to 16.8 per cent.

That’s on top of the three million coronavirus cases and 77,000 deaths amongst the 50 million population.

Duque did meet journalists on Friday and admitted “we clearly got the communication wrong”. With elections a year away and the left climbing in the polls, it all points to “a presidential campaign that rather than being polarised, will be radical”, said Libreros.