NEW YORK (AP) – The last time Coldplay put out an album, it was like a warm embrace of Earth. This time, the British foursome has gone bigger – cosmically bigger.

Music of the Spheres is a spacy 12-track collection with waves of synth and airy melodies. The track Infinity Sign sounds like it was created inside a starburst and Biutyful is a hit of ecstasy in musical form. This is an album that should be playing as astronauts gather on a slowly spinning space station for a galactic rave.

“It is a bit grander in its sound,” said lead singer Chris Martin. “The songs come first, but the picture frame of the title of Music of the Spheres sort of easily said which songs might fit within it. But you’re always at the mercy of what songs decide to show up.”

Guitarist Jonny Buckland uses a fishing analogy: “The concept kind of builds the net, do you know what I mean? And then the net catches the type of fish that it wants to.”

The seeds to the new album were sown years ago, when the British band was finishing up their tour for A Head Full of Dreams. The pandemic scrambled their plans, leading to their last album, Everyday Life, a dense and complex work with words spoken or sung in Arabic, Spanish, Zulu and Igbo. It was as introspective about humanity as the new one is lofty. 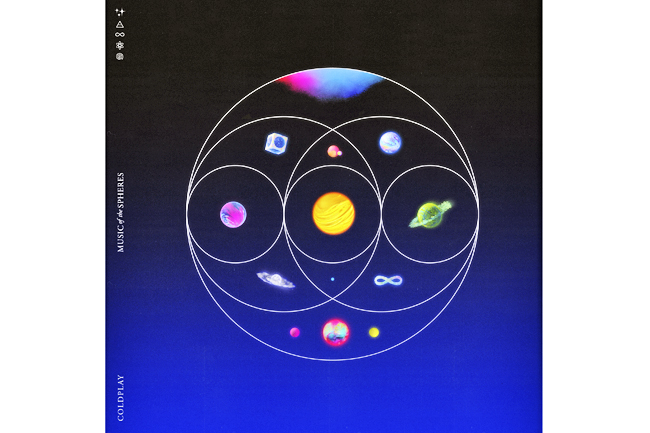 This time, the band teamed up with super-producer Max Martin, who they credit with a less-is-more approach. He helped the songs breathe for a band known for rich orchestrations.

“We historically as a band tend to fill space,” said Champion. “We paint with lots of layers, big thick strings and synths. And one of the reasons that I think we all felt such a relief with working with Max is that he is very conscious of not filling too many gaps.”

Added bassist Guy Berryman: “You’re not going to make a song sound bigger and more impressive by adding another layer of sound and then another layer of sound. It’s like when you mix too many colours together, you always end up with brown.” Five of the album’s 12 songs use emojis as titles and it has what every successful album needs these days – namely, a collaboration with BTS (the tune My Universe, which has already topped the Billboard Hot 100 songs chart). There’s also the breakup song Let Somebody Go – with Selena Gomez – that is forgiving and loving.

Martin kept it a family affair, with writing credit on the Gomez song from daughter Apple Martin, who also supplies the intro to Higher Power.

Son Moses Martin is credited with chorus vocals on Humankind.

“Apple gave me this amazing chord that I’d never thought of. So she’s on there,” Martin said. And he may be biased but he considers Moses a very talented singer: “So I often ask him to just come and make choruses sound better.”

The album ends with the 10-minute-plus Coloratura, a multi-suite voyage into the cosmos that’s a kind of flex from the band and represents a departure.

“That was towards the end of the recording of this album, and I think Max Martin had given us a lot of confidence. We knew that we had some more poppy songs so there was sort of a feeling of, ‘Well, this last song, which is currently six minutes, what would happen if we just let it really be what it wanted to be?'” he said.

“It’s not going to reach everybody and it’s not for everybody, but some people might really enjoy the sort of movie-ness of it, including us, because we’ve never allowed ourselves to do that. We’ve always felt like we should wrap this up.”

Coldplay aren’t the only artists to tap into the heavens in recent years, with Nick Jonas releasing Spaceman, Beck’s Hyperspace and Masked Wolf’s Astronaut in the Ocean. Dua Lipa’s video for Levitate is a space party in an Art Deco elevator.

For Coldplay, using space offers them a chance to talk about ending manmade demarcations. From space, they note, the Earth is just water, mountains and trees.

“We want to try and get rid of as many of those divisions and those barriers between people as possible because we see that we’re just this little ball floating in a huge, huge universe and we need to look after each other and the planet itself,” said Champion.

Martin notes that for all the spaciness, it’s still a Coldplay collection – optimistic and hopeful. Talking about planets is a canvas to be talking about being human.

“It’s really another record about life as a human person, but given this freedom that comes when you pretend it’s about other creatures in other places,” he said.