SARAJEVO, BOSNIA (AP) – The new year’s festivities are over in Bosnia, and visitors to the country’s winter resorts are packing to go home. Spring-like temperatures have left little or no snow on the mountains, and it’s unclear when the next visitors will arrive.

The small Balkan country of 3.3 million is among several in Europe facing a ski season slump amid balmy climes that have swept much of the continent as 2023 begins. Along the slopes in Bjelasnica near Sarajevo on Wednesday, snow accumulation amounted to little more than several white patches on an otherwise grassy landscape of brown and green.

Record-high daily temperatures for this time of year have been beaten – at times obliterated – in recent days at hundreds of meteorological reading stations in at least 11 countries: Bosnia, Belarus, Belgium, Czechia, France, Germany, Latvia, Lithuania, the Netherlands, Poland and Switzerland.

The United Nation’s (UN) World Meteorological Organization has long warned about the ill-effects of climate change, and said the last eight years have been the eight hottest on record. The fallout this winter hasn’t been limited to snowless slopes, where mid-range altitudes have been affected most of all: Weather officials and scientists say flora and fauna are feeling the impact too. 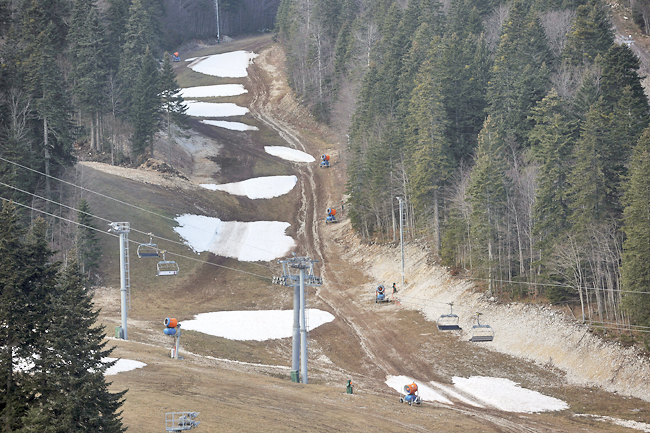 Swiss Ornithological Institute spokesman Biologist Livio Rey said many ducks that would normally migrate to Switzerland this time of year from Nordic countries don’t come anymore, like the tufted duck.

Up in countries like Finland, “they find food because the lakes aren’t freezing” – meaning they can continue to feast on mussels that they devour in warmer seasons, and would normally be inaccessible because of ice in wintertime, Rey said by phone.

While the warm spell has been hard on businesses depending on snow sports, higher temperatures have brought some relief in Europe’s struggle with high energy prices. Short term natural gas prices, while still high by historical comparison, are now lower than they were before the situation in Ukraine.

Russia’s move to cut off most pipeline supplies to Europe sent prices as high as EUR342 per megawatt hour in August. On Wednesday the price was around EUR69 per megawatt hour, down from EUR88 on the eve of the invasion in February.

The warm spell reduces demand for gas heat and gas-generated electricity, easing fears of government-imposed rationing that would further hurt the European economy.

But the record recent warmth has meant cold comfort for medium-altitude ski resorts like those in Bosnia, which have been feeling the pinch while the highest-mountain peaks have still seen snow.

On Vlasic Mountain, near the central town of Zenica, tourists packed up for an early return home amid spring-like temperatures. Hotel owners said bookings are down, and with them both room prices and staffing levels. Tourism officials said vacationers are forced to seek alternatives to skiing, like hiking on grassy mountaintops – or riding ski lifts, just for the views.

“Right now, when we should be welcoming skiers on our mountain, we have no snow so there is no doubt that our business will falter, that is to be expected,” said Sunce Hotel Manager Dino Korugic. “Our bookings correlate strongly with the weather forecast.”

The German weather service recorded more than 300 new station records for January on New Year’s Day. For December as a whole, temperatures in Germany were 1.8 degrees Celsius higher than the 30-year average from 1961-1990.

Belgium’s Royal Meteorological Institute head of forecasting David Dehenauw said the country had its warmest New Year’s Eve on record, with a minimum of 13.4 degrees Celsius in south Brussels from 7am to 7pm – three degrees higher than the previous record in 2012.

In Czechia, the eastern city of Javornik tallied a new New Year’s Day record of 19.6 Celsius – eclipsing the previous high mark that was set a year ago in northwestern Kopisty by nearly four degrees Celsius.

In Bosnia and elsewhere, man-made solutions to fight the heat and keep slopes open weren’t holding up under what some call the “green winter”: Either it’s too warm to make artificial snow, or it melts soon after being spit out onto the slopes.

Jahorina ski resort ski competitions consultant Srdjan Stevanovic said its managers started churning out artificial snow at the end of November to prepare for the mid-December opening of the ski season, but the warm weather has thwarted their efforts.

“Despite the most modern snowmaking system, installation of new ski-lifts, gondolas and nature proved stronger than us and made it impossible to make snow for our guests,” he said.