ANN/NEW STRAITS TIMES – Compared with the ever-modernising Ho Chi Minh City, with its forest of skyscrapers, Hanoi is the most authentic big city in Vietnam.

The long-time national capital, Hanoi is a haven for Vietnamese art forms and has a wonderfully traditional Old Quarter, where ancient lifestyles persist on streets lined by timeworn buildings.

It is also a city with a flair for the curious. You can learn to corral deadly cobras, drink coffee digested by Vietnamese “weasels”, dine like a United States (US) president, admire an enormous wall that tells the city’s story and bravely try local delicacies on “fear factor” tours.

I am 13,000 kilometres (km) away from the White House in Washington, DC, sitting in a small and no-frills restaurant in Hanoi. So why is this venue, Bun Cha Huong Lien, smothered in images of former US President Barack Obama?

He is pictured on the menu too, alongside the “Combo Obama” set that includes a dish of bun cha grilled meat, herbs and rice noodles. You get Nem Hai San fried seafood rolls and beverages as well. 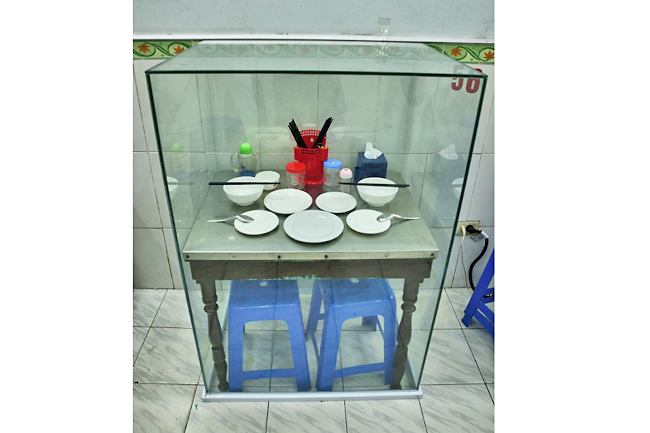 Meanwhile, people are taking photos of a small table encased in a glass box. All this fuss is because the bowls and utensils were used by Obama and the late celebrity chef Anthony Bourdain during their visit to this bun cha restaurant in 2016.

Media and onlookers swarmed the restaurant that day. So, its owners have cashed in on this exposure by turning their humble eatery into a tourist attraction.

I thoroughly enjoy the bun cha here, although it is no better than many other versions I have eaten in Hanoi, which is where this dish was invented. Instead of waiting for a seat here, pop by briefly to take in its Obama quirkiness, then take a short stroll in any direction to find a far less crowded and equally impressive bun cha establishment.

THE WALL THAT INSPIRES HANOI

If you have ever visited Hanoi, then you have probably seen it. It hugs the main road that connects Hanoi airport with the city’s Old Quarter and it is the largest art project in Hanoi’s history.

Stretching for almost 4km, the wall is one of the longest murals in the world, composed of millions of ceramic shards, precisely position-ed by dozens of local artists and child assistants.

It took them three years to complete the mural in 2010 for the 1,000th anniversary of Hanoi.

They decorated it with hundreds of vivid scenes, spanning military successes, imperial ceremonies and festivities. It is well worth following part of the trail on foot.

The mural starts at Long Bien bridge, in the northern section of the Old Quarter. Trace the mural north from there, for 1.5km. Then, loop back to your hotel in the Old Quarter past the serene West Lake. You will see two of Hanoi’s most striking structures – the 1,400-year-old Tran Quoc pagoda and the 1,000-year-old Quan Thanh temple.

INSIDE THE VILLAGE THAT SLITHERS

I grew up in Australia, a country infamous for being infested with dangerous creatures, including 20 of the 25 most venomous species of snakes in the world. Yet, even I am uneasy as I enter the ominously named Le Mat snake village, in the eastern suburbs of Hanoi. This is not a tourist trap.

This village really revolves around snakes. For at least five centuries, Le Mat has been a hub of snake catchers – men who fearlessly pursue and trap serpents.

If a Hanoi resident finds a snake coiled up in his or her home or garden, he or she calls one of these Le Mat men, who are happy to collect the creature before either selling it, cooking it or draining its blood to drink. In his Le Mat home, I meet a 57-year-old snake catcher named Ba Mao, who has a dozen cobras stored in his garden.

Six generations of his family before him had done this same bold job. These days, he and his colleagues in Le Mat supplement their incomes via tourism.

They welcome travellers into their homes to see their snake collections, drink snake blood – believed to improve eyesight – or even eat the reptile’s heart.

I am too squeamish to consume any part of a reptile, even if it is precisely prepared at the snake restaurant in Le Mat. Instead, I have some flavourful pho soup at Bat Trang, Hanoi’s famous porcelain village, which is east of the capital and a calming complement to Le Mat on a day trip.

Singaporeans now take their coffee more seriously than ever, with more high-end cafes selling pricey and meticulously brewed coffee. Some even pay up to BND85 a cup for rare coffee made from beans grown in the isolated mountains of Panama.

While coffee from Central America, South America and Africa is widely coveted, it may surprise you that the world’s second-biggest producer of coffee beans is Vietnam, after Brazil.

And Hanoi has long been the hub of Vietnam’s coffee culture. The quintessential Hanoi experience involves sitting at one of its street-corner cafes in the Old Quarter and sipping an egg coffee while people-watching.

This Vietnamese drink is memorably potent. Often served in a glass with dark brown goodness topped by a thick creamy layer.

This Hanoi concoction is very strong filtered coffee mixed with a blend of sweet condensed milk and whipped egg yolks.

It is invigorating and filling. If you want to skip breakfast or lunch, but do not want to run low on energy as you explore Hanoi, I recommend an egg coffee. Should you wish to take this taste of Vietnam back to Singapore, visit Hang Buom Street in the Old Quarter, where there are more than a dozen shops selling Vietnamese coffee beans.

That includes the unique weasel coffee. The beans are eaten, digested and then defaecated by civets, a cat-like animal common in the central highlands of Vietnam.

Because of their rarity, and reputed richer taste, weasel coffee beans cost up to BND500 a kg. Or you could just pay BND2 for a delicious egg coffee. Your choice.