SEATTLE (THE WASHINGTON POST) – Around the corner from the historic Pike Place Market’s idle fishmongers, Chris Hoyt was overseeing a construction crew taping and muddling drywall on the ground level of a century-old red-brick building that would soon take the form of small private offices and meeting rooms.

The site is slated to be a new location for Hoyt’s co-working business, the Pioneer Collective, and the centre of his bet that pandemic-weary workers will need a refuge after spending nearly a year in makeshift home offices.

“A massive group of people has been thrust into remote work against their will,” said Hoyt. “Once the honeymoon phase ends, the majority would prefer somewhere other than the kitchen table or even home office, whether at an individual or team level.”

That’s Hoyt’s hope, anyway. The remote-work industry suffered a significant blow during the pandemic. At least 226 co-working locations closed permanently in 2020, accounting for six per cent of the sites tracked in North America by Upsuite, a co-work matching service. WeWork closed its launch location, housed in a high-rise in Manhattan’s SoHo neighbourhood, and 70 others across the country.

“There has been a lot of carnage,” said professor Libby Sander at the Bond Business School in Australia who studies global remote-work trends.

But there may be signs of hope for the industry as employees, some armed with stipends from their employers, look for an alternative to working from home. With large companies increasingly setting remote-work policies that include several days per week away from the central office, industry experts say they expect co-working and flex office spaces to find a new customer base.

“We know that most people don’t like or aren’t suited to work from home five days per week,” said Sander. “The sweet spot is two and a half days per week.”

For some displaced workers, it’s about convenience. 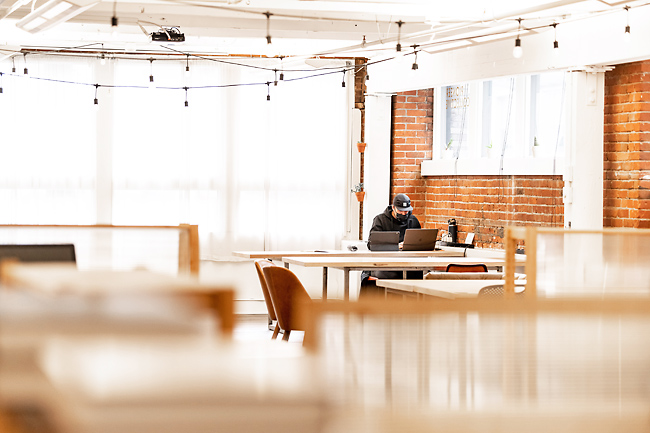 Forensic psychologist Chriscelyn Tussey said she and her husband, who works in advertising technology, often get little done working from their Manhattan home while their children attend virtual school. But their daughter spends at least 20 hours per week training as a competitive gymnast. Tussey and her husband aren’t allowed inside because of pandemic restrictions. So they purchased a membership at the Brooklyn Creative League, four blocks from the gym, and spend four to five evenings per week working out of the space in between chaperoning their daughter.

“It’s not what we intended and an extra financial burden,” Tussey said. “But our ability to focus is way better than at the gym.”

IWG, which claims to have invented the flex office space industry 30 years ago, said the pandemic has caused a major shift in its customer base. About one million of the company’s accounts are currently working from home, and IWG provides them tech support, secretarial services and furniture, IWG founder and chief executive Mark Dixon said.

In January, London-based Standard Chartered Bank inked a deal with IWG to allow 90 per cent of its 95,000 employees worldwide the opportunity to work from any of IWG’s 3,500 locations for the next 12 months in lieu of the company’s central offices in banking hubs such as Hong Kong; Frankfurt, Germany; and Sao Paulo, Brazil.

After conducting a botched initial public offering (IPO) and expanding into running schools and apartment rentals, WeWork says it is refocusing on workplaces during the pandemic. Rather than depending on small businesses and individual memberships, more than half of WeWork’s customer base is now large companies leasing blocks of workspace for their employees. In November, Deloitte leased 35,000 square feet at a WeWork in Manchester, England.

No location has returned to pre-pandemic levels, but the company expects to reach profitability for the first time this year.

Early advocates of housing remote-working locations in the suburbs rather than central downtown districts say the pandemic has also boosted their business as workers look for a place nearby. “Everyone thought we were nuts seven years ago,” Chief Operating Officer Meagan Slavin of 25N, an Illinois-based remote-work company, said of the decision to open a location in Geneva, Illinois, about an hour west of downtown Chicago. But “we wanted to focus on the suburban market because we wanted to be close to where people live,” Slavin said.

The company, which operates five locations across Illinois, Texas and Virginia, plans to open three additional locations in Texas suburbs later this year.

“I have a lot of people saying, ‘I have a company stipend, I can use it for whatever I want on my work area,’” said Slavin.

“The ‘hot’ desk was starting to go away pre-COVID, and the office was becoming really popular,” Slavin said. “But flex is starting to boom again. People only need a couple days per week.”

That’s the bet Hoyt is making in Seattle.

“The pendulum has swung away from the notion that offices are dead and we will work from home forever,” said Hoyt. “There is a consensus that companies are going to downsize their footprint and lean into remote, distributed teams. That’s challenging for office towers but an opportunity for us.”

Before the pandemic, the Pioneer Collective was having a banner month, and Hoyt’s wife, Audrey, was pregnant with their third child. The conference room calendar was packed with quarterly off-site meetings from local heavyweights such as Amazon, Facebook, the Bill & Melinda Gates Foundation and Starbucks. Coding boot camps met nightly in a classroom the Hoyts had painted themselves on the building’s fifth floor.

But it all came to a halt as the novel coronavirus began to spread across the country. By the end of February, Pioneer’s big clients began cancelling planned meetings, and smaller gatherings were wiped off the calendar by early March, erasing 30 per cent of the Pioneer Collective’s revenue stream overnight.

Amid the upheaval, Audrey gave birth to their son Theo on March 15, the same day Washington Governor Jay Inslee, a Democrat, closed restaurants and other indoor spaces.

“When we got to the hospital to have our son, Chris was listening to Inslee trying to figure out if we were even allowed to be open tomorrow,” said Audrey, who co-founded the business. The Pioneer Collective closed its doors in March and didn’t re-open until early June.

“The pandemic felt so earth-shattering that there almost wasn’t time to be stressed,” Chris said. “I didn’t even let myself think about the ultimate impact.”

Chris began contacting all of Pioneer’s 150 members. Many were facing sudden financial hardship, and he let them out of their contracts without a penalty. For those willing to remain, he issued membership deferrals and offered extra months. Pioneer cut spending on software, printing, cleaning and kitchen beverages. Hoyt said he re-negotiated their leases so that they paid a smaller base rent and then shared revenue with the landlords.

“When we do well, they do well,” Chris said. “When we’re struggling, it’s not going to sink us.”

But following three deaths in their family in the spring and summer that added an emotional burden to caring for a newborn, the couple considered closing the business for good.

“With very little cash out of pocket, we could have closed our doors,” Chris said. “All we would have had to do was auction off the furniture.”

The Hoyts said they were able to hold on with the help of a USD44,000 Paycheck Protection Program loan and a state programme, SharedWork, that allows employers to reduce hours while making employees eligible for unemployment benefits to make up the difference.

After months of scrambling to survive, Chris Hoyt now says he sees an opportunity.

The couple had longed for a downtown location near Pike Place Market for years, but astronomical prices kept it out of reach. It took the pandemic and civil unrest after the death of George Floyd, which together have contributed to the closure of more than 150 downtown street-level businesses in the past year, to make it possible.

With commercial landlords struggling to attract tenants, the Hoyts inked a deal to pay about 40 per cent less per square foot than the asking price for 1,200 square feet in the historic downtown building. The rate is comparable to what they secured for their first Seattle space back in 2014. If the new location is forced to shut down within the first 12 months, the landlord has agreed to let them out of the lease.

But as the Hoyts prepare to expand, they are still treading water at their two existing locations, where they charge up to USD225 per month for hot desks, which are shared with other members, and USD475 per month for dedicated desks. Memberships are back at pre-pandemic levels, but many of those are cheaper virtual memberships, USD75 a month, that offer little more than a business address and mail service. Small offices, which are integral to the Hoyts’ strategy, remain a hard sell, and under a state mandate, they can operate at only 25 per cent capacity for their customer base of primarily freelancers and remote workers.

It’s just enough to get by. “Just breaking even makes it well worth it because we are very optimistic about what the future holds for this industry,” Audrey said.

The Hoyts say they see potential in workers looking for a respite from work-from-home life. Employees may crave a change of scenery and a taste of social interaction after enduring extended isolation. They are also pinning their hopes on a post-vaccination surge of off-site meetings between supervisors and new hires, strategic planning sessions, and social events to build camaraderie among teams that do not see each other as often in person.

“We felt comfortable enough with the risk given the situation,” Audrey said of the expansion. “Staying in the game makes a lot of sense so that we can come out on the other side. This is our fourth baby: Starting a business together.”