THE STAR – As the sound of the gong, drum and cymbals erupts, a lion decked in bright red and gold jumps from pole to pole, eventually plucking an envelope hidden in lettuce leaves.

The traditional lion dance, which heralds the Chinese New Year (CNY), is going virtual this year, as many organisers are answering the call of the government to put safety first in an effort to contain the pandemic.

Khuan Loke Dragon & Lion Dance Association said it will upload videos of past performances or even make a live stream.

“The idea is for viewers to bring luck into their own space virtually. Though it lacks the excitement of a live performance, we hope viewers will still find it enjoyable wherever they are with good speakers,” said its coach and manager, Eric Fong.

In a live performance, the host will present ang pow to the troupe as a token of appreciation but this year Fong is not expecting any kind of payment for the online videos.

“We’re going to consider it a form of public service,” he added. 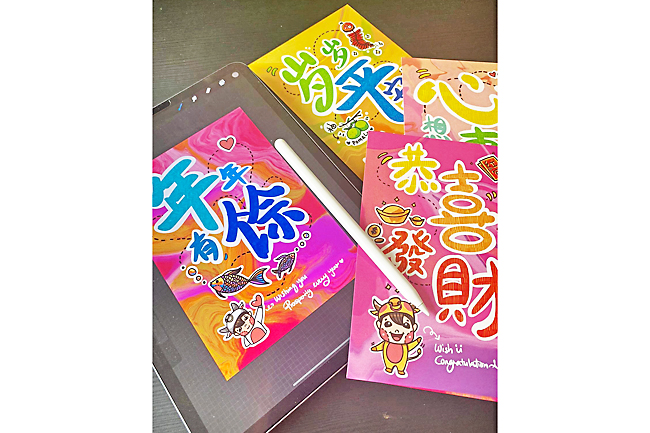 “It’s just like watching a lion dance performance with a crowd in real life. We’re adapting so everyone can still enjoy the performances during CNY while maintaining physical distancing,” he said.

Deswin Loh, Kung Fu and lion dance instructor at Chung Hwa Wushu and Lion Dance Malaysia, said the organisation is also prepared to upload videos online as a way of keeping the tradition alive during the pandemic.

“Though our students can’t perform, they will be happy to know that people can still catch the lion dances online. They also think it’s good for the culture,” he said.

However, not every aspect of a lion dance can be translated to an online video. Loh explained that when lion dance troupes are asked to perform at business premises, it’s part of a tradition to observe hoi kong tai kat or celebrate returning to work after CNY.

“The lion dance troupe will perform a blessing ceremony before the performance. Then the troupe will greet the crowd and distribute Mandarin oranges as a symbolic gesture of good fortune. Sadly, that’s not something that can be done online,” he said.

For the first time in 28 years, Fong will be able to spend more time at home as live lion dance performances have been prohibited this year.

“I used to only spend one day at home during CNY as I will have to travel everywhere with the troupe for performances. My wife is happy because she said I can spend more time with her,” he said.

He admitted that the pandemic has been a difficult time for lion dance troupes across the country.

“Every day I wake up I ask myself when this nightmare is going to end. But I also have to stay positive and not let my team feel helpless. I told the team we can rest this year. Hopefully when things get better, we can perform again,” he added.

Red packets or ang pow too have gone digital.

WeChat, a messaging platform, first launched such a feature in 2014 in China. When users receive a virtual ang pow, which can be accompanied by a message, the amount will be deposited into their WeChat account automatically.

A year after the feature was launched, website TechCrunch reported that over one billion red packets were delivered virtually.

A similar feature was introduced in Malaysia in 2018 by e-wallet platform Boost, which also offered additional rewards with every packet.

This year, Touch ‘n Go is encouraging its users to reload their e-wallet on Li Chun, the date in the Chinese calendar that signals the start of spring.

Users can also use the credit to send virtual ang pow packets to others, just like they can with Grab, another e-wallet provider.

Though convenient, it’s a change that some, especially the elderly, still find challenging.

Mary, a homemaker in her 50s, said she doesn’t know much about online transfers but she plans to try it out, as she has limited choices. “You don’t get to see the younger ones kneeling before you as a sign of respect and offering well wishes before accepting the ang pow. I feel it’s more than just a tradition because it’s also a time to instil good manners in children, ” she said.

Her son who is in his early 30s will be showing her how to send ang pow digitally, she said, adding: “Otherwise, I’ll never be able to adapt.”

Tan Yun Yi, a senior lecturer at Universiti Sains Malaysia and facilitator for Bengkel Teknologi Senior, which helps the elderly adapt to new technologies, said there is a need for the younger generation to aid their parents in understanding new features.

“I suggest using a fun and more relatable approach. Instead of saying alarming things like ‘Oh, it’s dangerous to send money online’, try explaining the benefits such as cash rewards and convenience,” she said.

Audrey Lim, a finance project manager based in Singapore said she plans to send ang pow to her family via online banking.

“I know the online method lacks the traditional touch but it’s not a major issue for me. What really matters is fulfilling the purpose, which in this case is to show appreciation to my family during CNY despite not being able to go home,” she said.

Family gatherings such as reunion dinners which are held on CNY eve will also be largely observed through video calls by many during the pandemic.

Though it’s not an ideal situation, Loh said it still lets him enjoy reunion dinners with family members from afar.

“We usually celebrate in Kuala Lumpur and then visit relatives in Ipoh, Perak. But with the travel ban, we’re okay to ‘visit’ them through video calls using WhatsApp or WeChat,” he said.

Lim agreed, saying she will stay in touch with her family through video calls too.

“We have no plans yet for a virtual sit-down meal. As long as I call my parents and talk to my grandmother, I believe they will be happy,” she said.

One custom that has taken a back seat to technology is sending physical greeting cards.

A businesswoman based in Penang who only wanted to be known as Waye said her printing company used to service lots of customers during festive periods, including insurance agents who would typically purchase about 500 cards.

“However, the demand for physical greeting cards started to decline when people began using apps like WhatsApp. When we reached out to our usual customers asking if they wanted to purchase cards again, they would ask ‘What for?’ since they feel it’s no longer needed,” she said.

The greeting card division at her company shut down two years ago, she said, adding: “I also think the increase in postage rate has also made people feel it’s more expensive to send mail in bulk.”

According to Pos Malaysia, the postage rate for greeting cards depends on a number of criteria such as size, weight and envelope colour.

The rate for non-commercial users starts at MYR0.60 a piece while commercial clients pay MYR1.30 a piece. It said the postage rate was last revised in 2020 but only applied to registered and commercial mails, as well as small parcels below 2kg.

“With the added cost, I suppose our customers felt that it was time to say goodbye to a gesture they used to consider as tradition. They also feel that their clients don’t care if a festive greeting is physical or online,” Waye said.

Johnson Lai, a digital marketing consultant for Johor-based Optisage Technology, said the company offers digital CNY cards that customers can personalise with their own message.

“When we launched this business three years ago, we promoted a ‘go green’ initiative and reminded our corporate clients that they can skip the hassle of signing hundreds of cards or arranging for delivery at the post office,” he said.

Though there are plenty of free services, Lai said some are willing to pay for personalisation.

“Yes, they can download virtual greeting cards for free but they probably won’t know how to embed the company logo and insert their own messages.

“Some feel sending out greetings cards with a personalised message and branding is essential to maintaining a professional image,” he said.