“Kung Fu is not only an entertainment,” beamed the 35-year-old Tanzanian Kung Fu teacher.

Mfaume, father of a two-year-old daughter, owns Shaolin Temple Tanzania Kung Fu Club in Dar es Salaam. He was trained in China’s Shaolin Temple in Henan province for three months in 2013 under the sponsorship of the Chinese government.

The Kung Fu teacher said in 2014 the Chinese government offered him another scholarship for a short course training on Chinese culture which helped him fully engage himself in promoting Kung Fu across Tanzania.

Mfaume said cultural exchanges between China and Tanzania are a golden opportunity, and Tanzania stands to learn a lot from China’s advanced technology and development. “With Kung Fu training, doors to a bright future are open. What we need to do is to train our young men,” said the teacher. 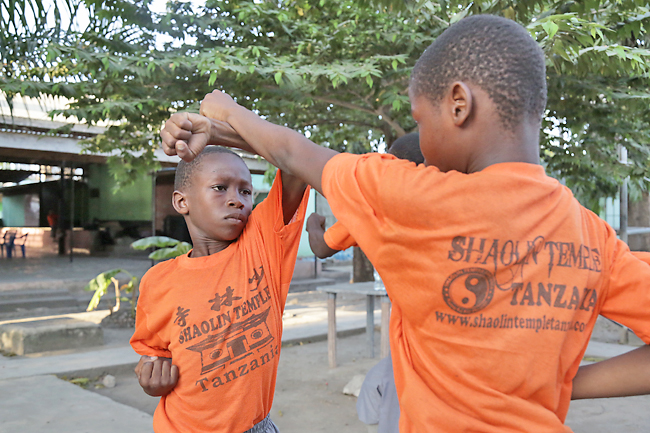 At the beginning, Mfaume felt that there was still slow response in Kung Fu training in the country because a section of the population thought that Kung Fu is connected to criminality, which is completely wrong.

With the spread of Kung Fu education, public awareness is changing. “People now believe that Kung Fu is a good martial art intended to discipline and to protect our youth from various dangerous situations,” he added.

According to him, he has trained over 1,000 people after he opened Kung Fu clubs in several regions in Tanzania, including Tanga, Lindi, Dodoma, and Mbeya.

He said movie makers across the world are looking for good Kung Fu trainees like the ones he is grooming in Tanzania.

“Kung Fu can create employment by performing in action movies. One can become a super star through acting in a movie,” said Mfaume.

Hamad Abdallah is one of the Kung Fu trainees at the club. He learned about Shaolin Temple through social media.

“Since I started cultivating interest in Kung Fu from when I was a child, I decided to join the Shaolin Temple (Tanzania Kung Fu Club) and my family supported me to join the training,” said the 18-year-old student from Makongo Juu Secondary School in Dar es Salaam.

“Kung Fu has improved my health. It has inculcated discipline in me and it has also improved my self-defence,” said Abdallah.

“I have trained for two years now and my focus is to become a Kung Fu super star and become a world renowned actor,” said the student as he joined his evening training.