A group of four British military personnel based in the Sultanate and expedition leader from the United Kingdom (UK) scaled and flew the national flag of Brunei Darussalam on top of Kala Pathar (5545 metres) last week.

Kala Pathar is a notable landmark located on the south ridge of the Pumori Hill in the Nepali Himalayas above Gorakshep.

Other members of the team were based in the British Gurkhas Nepal.

After reaching the famous Kala Pathar, the group proudly pulled out the national flag of Brunei Darussalam and flew it high on the scenic mountainous region.

WO1 Ram Rai is with the British Forces Brunei and during an interview said, “The original target was the Everest Base Camp (EBC), but due to the lack of get-in flights, we spent over three days trekking to Lukla. 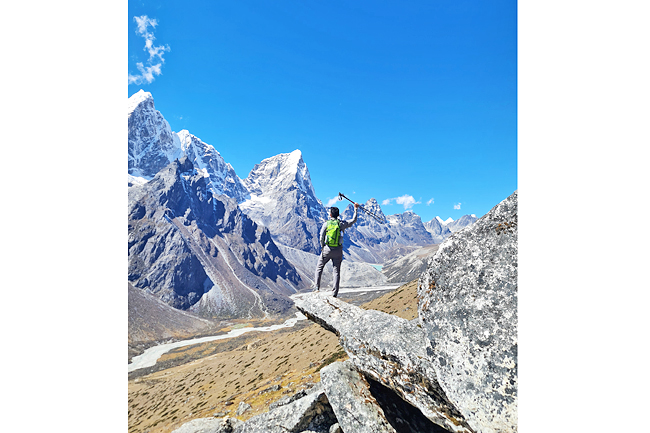 “This forced the expedition leader to revise our goal and we ended up going to Kala Pathar, which turned out to be a better challenge than the EBC.”

He added, “The expedition was organised by some of our military colleagues based in Nepal.

Speaking on the main challenges faced during the climb, he said, “First, due to the bad weather there were no get-in flights which forced us to spend up to three days getting up to Lukla with all our gears.

“It kept raining for the first few days and made our going uphill on foot very treacherous and tricky.

“Second, we had to cover much longer distances on foot due to the time lost at the beginning of the trek.”

He added, “On the final push for Kala Pathar, the air had become considerably thin. In addition, we were quite exhausted from trekking for around three hours to Gorakshep beginning at 0500 in the morning.

“So the final push was a stern test of our mental and physical prowess, without which success at such a short timescale would have been elusive.”

On reaching the top, he said, “It gave us such a big relief and a sense of great achievement considering the challenges we faced along the way.

“We had packed the Brunei national flag the night before and had worn the DIO (Brunei) top.

“We couldn’t wait to get a picture with it on Kala Pathar. It would have been the same even if it were the top of Everest.“

He also shared his passion for climbing. The 43-year-old said, “It comes from being born in Nepal amongst the Himalayas. I feel like I belong here and always had the urge to answer the calling one day.”