Clearing the fields: ‘Life is boring without explosions’

HRAKOVE, UKRAINE (AP) – Beside an abandoned Russian military camp in eastern Ukraine, the body of a man lay decomposing in the grass – a civilian who had fallen victim to a tripwire land mine set by retreating Russian forces.

Nearby, a group of Ukrainian deminers with the country’s territorial defence forces worked to clear the area of dozens of other deadly mines and unexploded ordnance – a push to restore a semblance of safety to the cities, towns and countryside in a region that spent months under Russian occupation.

The deminers, part of the 113th Kharkiv Defense Brigade of Ukraine’s territorial defence forces, walked deep into fallow agricultural lands on Thursday along a muddy road between fields of dead sunflowers overgrown with high weeds.

Two soldiers, each with a metal detector in hand, slowly advanced up the road, scanning the ground and waiting for the devices to give a signal.

When one detector emitted a high tone, a soldier knelt to inspect the mud and grass, probing it with a metal rod to see what might be buried just below the surface.

The detector’s hit could indicate a spent shell casing, a piece of rusting iron or a discarded aluminium can. Or, it could be an active land mine. 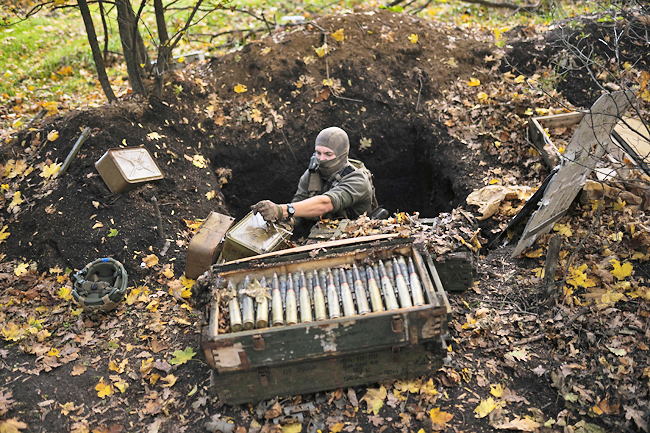 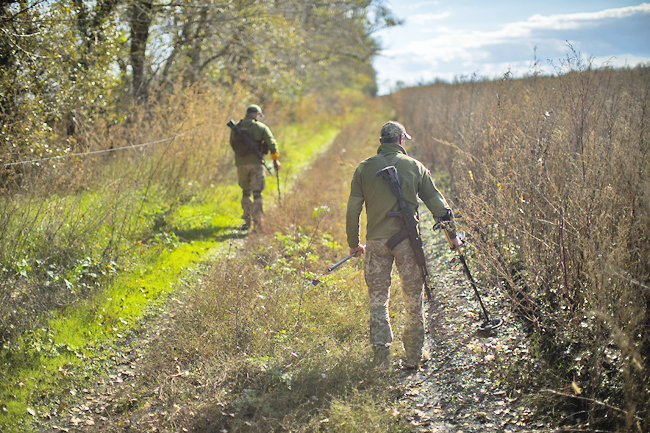 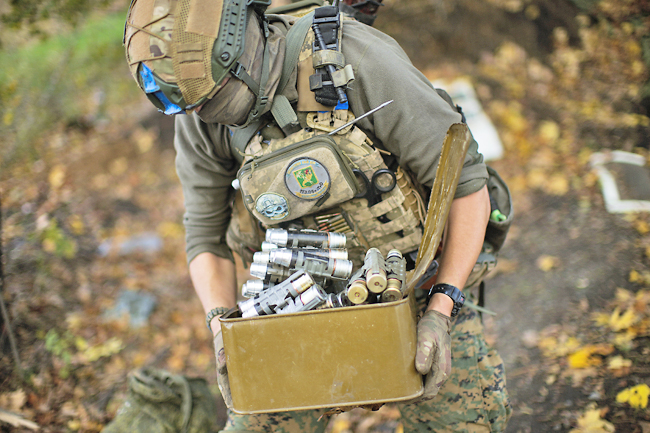 Commander of the demining brigade based in the eastern Kharkiv region Oleksii Dokuchaev said that hundreds of mines have already been discharged in the area around the village of Hrakove where they were working, but that the danger of mines across Ukraine will persist for years to come.

“One year of war equals 10 years of demining,” Dokuchaev said.

“Even now we are still finding munitions from World War II, and in this war they’re being planted left and right.”

While many settlements in the region have finally achieved some measure of safety after fierce battles reduced many of them to rubble, Russian land mines remain an ever-present threat in both urban and rural environments.

Small red signs bearing a white skull and crossbones line many of the roads in the Kharkiv region, warning of the danger of mines just off the pavement. Yet sometimes, desperation drives local residents into the minefields.

The local man whose body lay near the abandoned Russian camp was likely searching for food left behind by the invading soldiers, Dokuchaev said, an additional danger posed by the hunger experienced by many in Ukraine’s devastated regions.

The use of the kind of tripwire land mines which killed him is prohibited under the 1997 Ottawa Treaty – of which Russia is not a signatory – which regulates the use of anti-personnel land mines, he said.

“There are rules of war. The Ottawa Convention says that it’s forbidden to place mines or any other munitions with tripwires,” he said. The deminers had cleared the road of anti-personnel mines the previous day, allowing them to search for anti-tank mines hidden beneath the ground that could destroy any vehicles driving over them.

They hoped to bring vehicles deep enough into the area to retrieve an abandoned Russian armoured personnel carrier, the engine of which they planned to salvage. A vehicle would also need to be brought in by local police to retrieve the body.

The deminers reached the abandoned camp, set in a grove of trees and strewn with the remains of the months the Russian soldiers had spent there: rotting food rations in wooden ammunition boxes, strings of high-calibre bullets, a stack of yellowing Russian newspapers and trenches filled with refuse.

After a thorough scan of the area, the servicemen recovered two Soviet-made TM-62 anti-tank mines and six pneumatically armed fuses and placed them in a depression on the edge of the camp, taped into a bundle along with 400 grammes of TNT.

Dokuchaev placed an electric detonator into the explosive charge and connected it to a long length of wire before taking cover with his men at a distance of more than 100 metres.

When the charge was detonated – something the servicemen laughingly called “bada-boom” – the immense blast ripped through the air, causing a cascade of autumn leaves to fall from the surrounding trees and emitting a tall plume of grey smoke.

After the mines had been destroyed, Dokuchaev – a former photographer who enlisted with the territorial defence forces after the outbreak of war – said the work his brigade is doing is essential to keep civilians safe as they pick up the pieces of their shattered lives.

Despite the dangers, he said, he enjoys his work.

“I don’t know what I’ll do after our victory,” Dokuchaev said. “Life is boring without explosions.”