The Jazz rallied after blowing a 10-point lead in the first half and trailing in the third and fourth quarters.

The Jazz are second in the Western Conference at 8-3. They earned a rare sweep in Los Angeles, having beaten the Lakers 130-116 on Friday.

Paul George scored 34 points, the third time in four games that he topped 30, but Los Angeles had its three-game winning streak snapped. Marcus Morris added 18 points for the Clippers. Kawhi Leonard missed his eighth game while dealing with knee stiffness.

“We got to stick together,” Nicolas Batum said. “We’ll be OK.” 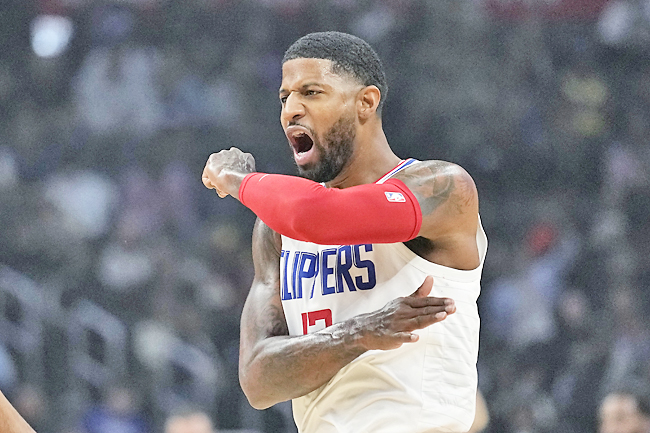 The Clippers missed all 11 of their three-point attempts in the fourth. George missed several shots down the stretch when the Jazz pulled away after erasing a four-point deficit.

“Lauri (Markkanen) did a really good job of making Paul George work hard and not just to make shots but to get the ball,” Hardy said. “Not all 11 (three-pointers) were guarded perfectly. There were just some that were missed.”

The Jazz scored nine in a row, capped by Malik Beasley’s three-pointer to take the lead for good with five and a half minutes remaining. It was part of a 14-2 run that extended Utah’s lead to 106-98. Sexton had seven points in the spurt.

“I’m starting to get more comfortable in myself,” Sexton said. “Just staying ready and being present throughout the game.”

The Clippers pulled within four on a dunk and inside basket by Ivica Zubac before Sexton dunked with 54 seconds left.

“We battled the entire game and we didn’t get down when Paul George made a tough shot,” Sexton said.

Sexton fed Markkanen for an inside basket in the closing seconds. Playing his first season in Utah, Markkanen finished with 18 points and nine rebounds.

Clarkson’s three-pointer early in the fourth tied it at 87-all.

The Clippers scored the first seven points of the third to pull into a 63-all tie. They closed within two five times before John Wall’s steal and basket forced an 81-all tie.

Wall followed with a dunk that put the Clippers ahead for the first time since the first quarter.

The Jazz took an 84-83 led on Clarkson’s three-pointer before Wall scored again, sending the Clippers into the fourth leading by one point.

George’s (AP pic, above) three drew the Clippers within one before the Jazz closed on a 13-7 run to go into halftime leading 63-56. Markkanen scored 11 of Utah’s points in the spurt when he made all five of his free-throw attempts.