The parade and field performances were meaningful with familiar National Day touchstones such as the uniformed-contingent parade and march past by public servants, flag bearers, private sector and NGOs in a show that lasted for an hour.

The Taman was donned in patriotic shades of red, white, black and yellow largely from the flags fluttering from buildings and sea of participants.

“However, this year’s National Day parade is different due to safety measures following COVID-19 pandemic but it is still a joyous occasion.

He said the theme ‘Accomplishing the National Vision’ boosts the spirit of children and youth participating in the parade. 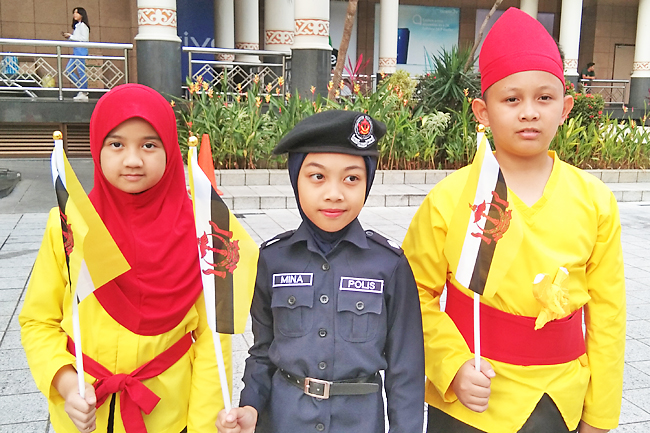 The initiative was part of their corporate social responsibility to contribute to the nation by giving back to the community in conjunction with National Day.

Meanwhile, a coach for the Lun Bawang ethnic community from the Temburong District who participated in the parade, said this year has a different format with a limited number of participants. In previous years, there were over 20,000 participants but it has been reduced to nearly 3,000 participants this year.

She said, “For the Lun Bawang community, we brought 11 participants from seven ethnic groups in the country, which means some 70 participants took part in the traditional parade.”

“There is a big difference in this year’s celebration in that the number of participants had been reduced and field performance time shortened. We had 11 members taking part in the parade. It is a responsible move by the organiser to avoid compromising safety and public health,” he said.

Meanwhile, philantrophist Mohd Wafi bin Injeo from Ikhlas charity project said they had been entrusted to channel complimentary contributions of some 1,200 bottled water from some 150 donors since 5.30am.

“The donors texted their contribution to our bank account. We carry out this charity project every Friday by delivering some 1,500 bottles of water to 20 to 30 mosques,” he said.

Acting Head of Environmental Management and Planning at Department of Environment, Parks and Recreation (JASTRe) of the Ministry of Development Roziah binti Haji Adanan said the campaign launched by Green Brunei Initiative in partnership with Brunei Shell Petroleum Company Sdn Bhd and supported by JASTRe is a whole-of-nation approach to tackle the use of plastics and to maintain cleanliness not only during the National Day celebrations but also in daily life.

The Bandarku Bersih (My Clean City) and My City is Free of Plastic Bottles launched by the Ministry of Development recently are also aimed at supporting the green vision.