THE WASHINGTON POST – In Elena Karpova’s household, the rumbling sound of a clothes dryer has become an unfamiliar noise.

“I use the dryer maybe twice, three times a year, just when it’s an emergency,” said Karpova, a professor at the University of North Carolina at Greensboro who studies textile and apparel sustainability.

Instead, Karpova prefers to air dry her clothes. Dryers, she said, are “energy gobblers” and when combined with machine washing too often can wear out clothes much more quickly, in addition to having huge environmental and climate impacts.

Washing “can be the most significant thing that you do” to your clothes, said a lecturer focussing on sustainability within the textile, clothing and fashion industry at the University of Leeds’ School of Design Mark Sumner.

Laundering a garment could cause it to shrink, become misshapen, fade or pill (when small balls of fuzz form on the surface of clothes).

“It can be really quite harmful to the clothes itself,” shortening the life of the garment and leading to purchases of new clothing, Sumner said. 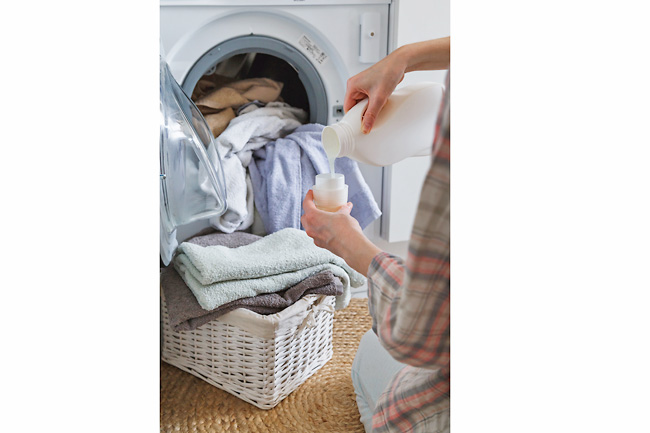 “And of course, let’s not forget about energy and water and detergents used in the washing process,” which can also release microfibres into waterways and exacerbate the problem of microplastic pollution. “It’s a double whammy.”

Making simple changes to your laundry routine, he and other experts say, can go a long way in helping you reduce emissions, save money and take better care of your clothes.

While many people focus on manufacturing when calculating their clothes’ environmental impact, machine washing and drying clothes can often be a major source of pollution and emissions.

In fact, the impacts of laundry can be “on the same order of magnitude” as the production phase of clothing, said a life cycle assessment expert and professor at the Bren School of Environmental Science and Management at the University of California at Santa Barbara Roland Geyer.

“People are washing their clothes more frequently than they ever did before,” Sumner said. According to Energy Star, the average American family does 300 loads of laundry each year.

A standard washing machine uses around 20 gallons of water for each load and electric dryers, on average, can use anywhere from 1,800 to 5,000 watts of energy, or about 1.8 to five kilowatt hours of electricity per cycle, according to Energy Star.

A household that uses washers and dryers certified by Energy Star could reduce their carbon footprint by more than 400 pounds of carbon dioxide (CO2) annually, according to the Environmental Protection Agency (EPA), which is equal to planting a quarter acre of trees.

If every American household swapped out their appliances for more efficient models, the impacts would be even greater. The combined cost savings would swell above USD4.8 billion each year and more than 41 billion pounds of annual greenhouse gas emissions would be prevented from entering the atmosphere, the EPA estimates. That’s equivalent to the emissions from nearly four million cars.

But even if you have high-efficiency machines, experts say it’s still important to cut down on the loads of laundry you’re doing.

“Every time we put that garment in the washing machine, part of it is gone down the drain,” said an associate professor in the department of design, housing and merchandising at Oklahoma State University Cosette Joyner Martinez. “Then we lose another piece of it in the dryer in the lint trap, so we’re disintegrating our garments.”

KNOW WHAT NEEDS WASHING AND WHEN

Aside from noticeable odours or visible stains, when your clothes need to be laundered largely depends on how the garments are worn and the type of material. Clothes that you exercise and sweat in, for instance, should be washed more frequently than the outfit you wear to work a desk job.

“Lots of people just have a T-shirt worn once and then they put in the laundry basket without thinking whether it’s clean or not,” Karpova said. “People don’t think about, ‘Is it clean? Does it need to be laundered?’ It’s just you go through the motions.”

What your clothes are made out of also determines how long you can go between washes, experts say.

Natural fibres like wool or cotton typically need to be washed less than synthetic materials, such as polyester. While polyester works well for activewear because of its moisture wicking properties, the material is “oleophilic”, or oil-loving, attracting oil from skin that can contribute to body odour. To make matters worse, research has shown that sweaty-smelling compounds can cling to polyester fibres and not wash out completely, leading to a buildup of odours over time.

The chemical structure and “fibre morphology” of natural fabrics are very different from synthetics, said an assistant professor of textile development and marketing at the Fashion Institute of Technology in New York Preeti Arya.

Wool, for example, is naturally odour resistant. The fibres can absorb large amounts of moisture which helps to keep skin drier, and prevent the sweat and bacteria that cause body odour from collecting. Wool fibres also have another unique property: The ability to trap odour molecules and only release them when laundered.

Odorous compounds, perspiration and oil are locked away in the centre of wool fibres, Arya said. Even if you’ve been sweating, you likely won’t see sweat stains or smell.

On the other hand, she said, if you wear polyester for a few hours, “You have to wash it because polyester loves our body oils and odours.”

HOW YOU WASH MATTERS

Water heating consumes about 90 per cent of the energy it takes to operate a washing machine, according to Energy Star. Changing your washer’s temperature setting from hot to warm can cut energy use in half. Washing with cold water can reduce your energy footprint even more.

By washing four out of five loads of laundry in cold water, you could cut 864 pounds of CO2 emissions in a year, an amount equivalent to planting 0.37 acres of United States (US) forest, according to the American Cleaning Institute.

Experts encourage using the cold cycle as much as possible.

“The temperature that we’re washing with is often way too warm,” Joyner Martinez said, adding that hot water settings are only really necessary for sanitising. Modern laundry detergents, even those that aren’t marked for cold-water use, are typically formulated to clean just as well at lower temperatures.

While single-dose detergent pods have become increasingly popular, a debate is raging over whether they may contribute to the growing plastic pollution problem that threatens human health and the environment.

Keep in mind that washers use about the same amount of energy regardless of the size of the load, so try to only run your machine when it’s full. And consider using higher spin settings if your washing machine has the option, which can reduce drying time.

Experts also caution against dry cleaning too often. In addition to the energy needed to power dry cleaners, traditional operations often use polluting chemicals that can harm human health and the environment. Some research also indicates that the chemicals can stay on dry cleaned clothes.

In January, the EPA added 1-bromopropane, a powerful dry-cleaning solvent and airborne pollutant that has been linked to cancer and neurological damage, to its list of hazardous air pollutants – a designation that allows the agency to limit its emissions.

Certain clothes, such as those with heavy beading or embellishment, require dry cleaning.

But some of the delicate materials that you might send to the cleaners such as silk or wool can be gently washed by hand, said Katrina Caspelich, who directs marketing and partnerships for Remake, a global nonprofit organisation advocating for fair pay and climate justice in the clothing industry.

Test a small section of your garment to make sure it’s suitable for hand-washing – any colour bleeding, warping or shrinkage is a bad sign – and use cold water and mild soap.

If you do need to dry clean something, you can ask for more environmentally friendly cleaning options, Caspelich added.

Some cleaners offer professional wet cleaning, where clothes are laundered in computer-controlled washers and dryers that gently clean. Another option is liquid carbon dioxide cleaning, which uses pressurised CO2 in combination with other cleaning agents.

You also don’t always need water and energy guzzling machines and detergent to keep your clothes fresh. “Really what people are trying to do when they launder is to make (their clothes) smell good,” Joyner Martinez said.

If possible, Sumner recommends hanging clothes outside in the sun where they can be exposed to UV rays. Steam is another way to de-wrinkle and help refresh your garments.