AP – The last week of April was a whirlwind for San Francisco’s Chinatown. The storied neighbourhood debuted the AAPI Community Heroes Mural, a mostly black and white depiction of 12 mostly unsung Asian American and Pacific Islander figures on the wall of a bank.

Three days later “Neon Was Never Brighter”, the first ever Chinatown contemporary arts festival, took over the streets throughout the night.

Traditional lion and dragon dances, a couture fashion show and other public “art activations” were featured in the block party-like event.

Cultural and arts organisations in Chinatowns across North America have worked for decades on bringing greater appreciation and visibility to these communities.

But they faced an unprecedented one-two punch when the pandemic caused shutdowns and racist anti-Asian attacks increased.

Those events have influenced the reemergence of Chinatowns as close-knit hubs of vibrancy and culture. 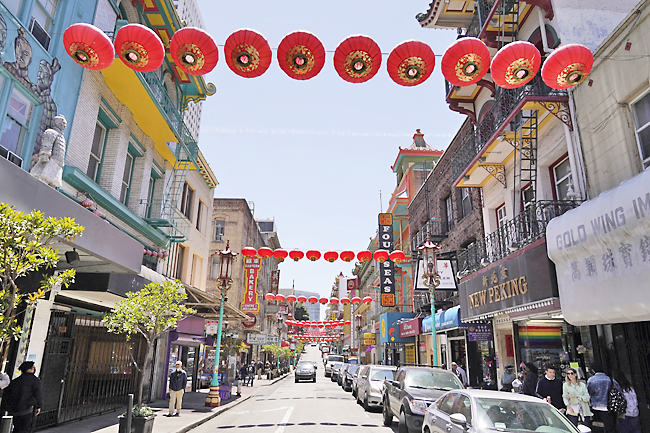 Co-founder of the Stop AAPI Hate reporting centre Cynthia Choi is still “blown away” to be one of the heroes painted in the San Francisco mural. But being at the festival was equally touching for her.

“I got really emotional because it’s been so long since I’d seen so many people come out to Chinatown, especially at night,” she said. “I knew it was going to be fun and exciting, but I was really moved.”

There has been renewed attention from cities, companies and younger Asian Americans from outside these historic Chinatowns.

Everyone wanted to “really address anti-Asian hate and to uplift Asian American voices”, said executive director of the Chinese Culture Center of San Francisco, which is part of the Collaborative, Jenny Leung. Youth voted on who to put on the mural.

“Frequently the way that Chinatown looks is imported as a tourist kind of attraction and fantasy for visitors to see,” Leung said. “It’s never really about celebrating the community’s perspective and voice.”

The idea for the “Neon” festival was briefly discussed pre-pandemic. But the events of the last two years lent urgency to it.

“We wanted to kind of push that deadline a little bit earlier in order to be able to address the empty storefronts that are increasingly rising in the community,” said Leung, who characterises Chinatown as a “museum without walls”.

A local filmmaker behind the documentary Chinatown Rising, Josh Chuck has noticed younger generations dining or participating in events in Chinatowns.

“Honestly, there’s no way I could have imagined something that would galvanise these people that I know. Even myself, like, I feel much more connected and committed,” Chuck said. “It’s a silver lining.”

In New York, the first of five summer night markets start next month in the city’s Chinatown. It will be the biggest event to date for Think!Chinatown.

The five-year-old nonprofit has done projects like artists-in-residency programmes and oral histories. But last year after a series of verbal and physical assaults against Asians, they partnered with Neighborhoods Now, a local pandemic relief initiative, on Chinatown Nights.

It was a small-scale gathering of less than 10 artist booths and food trucks in Forsyth Plaza park.

Despite a two-month prep window, there was a collective feeling of “we just need to be together”, said Think!Chinatown co-founder and director Yin Kong. And there was a “tectonic shift” with philanthropy focussing on equity.

“It reprioritised these other organisations that traditionally would have funded other things to focus on how to support communities in a different way,” Kong said.

The expanded event next month will have 20 booths and sponsorships, and will be scheduled when most Chinatown restaurants are closed so owners can participate.

“The mechanisms that got us there would not have happened without the pandemic,” said Kong, who feels Think!Chinatown is now seen as more “legit” with better funding, full-time staff and the possibility of an office space instead of her dining table.

In New York, Think!Chinatown plans to lease a space with a kitchen for art exhibitions and cooking classes. The hope is to keep engaging with Asian Americans inside and outside of Chinatown.

“What draws them to Chinatown is that cultural connection,” Kong said. “It’s something you can’t really put your finger on… But it’s really the soul of Chinatown. And we need to keep protecting it and make sure it can grow.”