COMAYAGUA (AFP) – Eduardo Espinal runs his own barber shop from a small zinc-roofed building in Honduras, opening the doors at 8am for a 12-hour workday. He is 12 years old.

When it’s quiet, he plays hide-and-seek or football with his friends. He has not been to school since last year.

Though it is illegal in Honduras for children under 14 to work, Eduardo is one of tens of thousands who do so in the poverty- and crime-plagued Central American country.

In 2021, more than one in 10 Honduran children aged five to 18 were working, according to Horacio Lovo of the INE national statistics institute.

Half-a-million of the country’s 2.3 million children neither worked nor went to school.

“I really like the barbershop and to study too,” Eduardo told AFP outside his “Eduar Barber Shop”, which he opened last month on the outskirts of Comayagua in central Honduras.

He charges between USD2 and USD3 per cut, depending on the style.

On his best day to date, he earned USD45 – a small fortune in a country where a third of the population of nearly 10 million people live on less than a dollar a day. 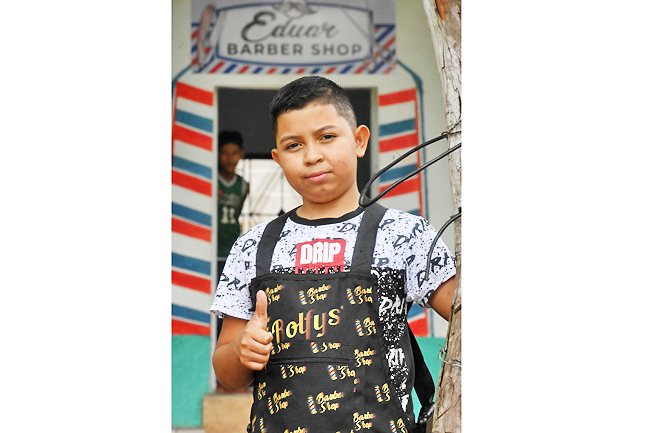 Wanting to help his family, the boy said, he started working as an apprentice last year, aged just 11, at the barbershop where he and his father had their hair cut.

His father bought him a set of shears, with which he practiced at home.

A month ago, Eduardo told his father: “Daddy, I can cut, I want you to buy me a (barber’s) chair,” Wilfredo Espinal told AFP.

The father obliged, taking out a loan to purchase the chair as well as the scissors, razor and other equipment needed, and helped the boy set up shop in a small building that used to belong to Eduardo’s grandmother.

“I play when I don’t have customers,” he added.

According to Lovo, Eduardo’s example is a “serious case of those (children) who leave school in order to work.”

“Children should be in school,” he stressed.

Eduardo finished primary school in 2021, and hopes to start high school next year.

According to a UNICEF report in 2020, some 55 per cent of Honduran children access lower secondary schooling, and just over a third reach the upper secondary level.

Schooling is mandatory for the first nine grades.

Dropouts skyrocketed after COVID-related school closures and the devastation wreaked by tropical storms Eta and Iota in November 2020, said the UNICEF report.

Eduardo dreams of becoming a “professional barber,” to build a home for his mother and help his little sister, now eight, open a beauty salon.

High poverty and unemployment, mixed with gang and drug violence, forces nearly 800 Hondurans to leave the country every day, mainly headed for the United States, where more than a million already live, most of them undocumented.