The club which goes by the name Palestinian Center of Boxing for Women currently has dozens of women aged between eight and 29 who receive 1.5 hours of training every day.

The co-founder of the club and a boxing coach, Osama Ayoub said that “we opened the club recently but the idea of practising the sport started a few years ago”, as he supervised his students’ training in the boxing ring.

“I came up with the idea to create a female boxing team six years ago when I participated in a boxing competition in Algeria, where I saw the fantastic performance given by Arab women of various ages,” he recalled.

Yet when Ayoub told his friends and colleagues about the idea, none of them thought it feasible as they live in a community where people hold very conservative ideas about women.

The 39-year-old coach did not give up and started to train a group of girls in 2017 with only five girls in his classes. 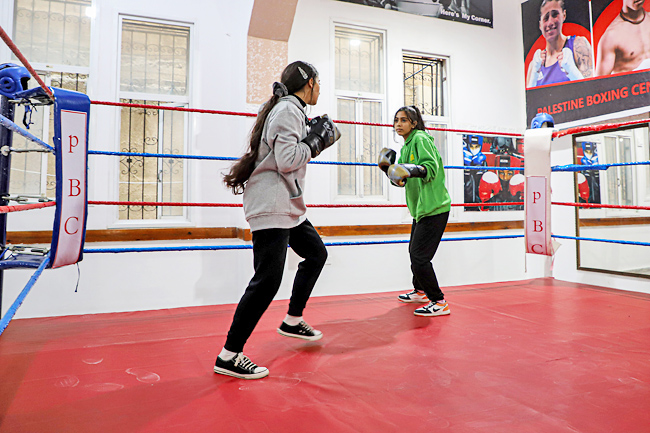 He noted that many people later changed their ideas about female boxing after they noticed the positive changes in the trainers’ psychological state. “Our community traditions force women to stay away from many kinds of sports under the pretext that they are limited to men only,” the coach lamented.

“Now I’ve planted the first seed of boxing sport for women in Gaza,” he said, wearing a smile. Hala Ayoub, a Gazan boxer, is one of the coach’s female students who joined the sport five years ago and has become a member of the Palestinian National Team. “I am so happy because I can represent my country (Palestine) in any upcoming Arab or international competitions of boxing,” the 17-year-old told Xinhua. For her, the sport helped turn her from a weak girl afraid of everything into a strong one with more self-confidence.

She said that “This sport is not, as many people think, a fierce and violent game. It helps us defend ourselves and enhance self-confidence and is also a way to get rid of the negative energy many people suffer from.

Jodi al-Nimer, another Gazan girl, joined boxing three months ago in hopes to help herself get rid of her inner fears of strangers even her classmates. “I came here to know how can I fight those who would harm me somewhere, (because) all the time, I feel that I am under threats, mainly from strangers,” the 10-year-old told Xinhua.

She said many of her friends described boxing as “a shameful sport for girls”, adding she would prove to them such stereotypes are wrong.

Still, the locals in the Palestinian coastal enclave are divided over whether the sport is fit for women.

“We are heading to the year 2023, so it is normal for girls and women to practise any kind of sports,” Mohammed al-Jaro, a Gazan man in his 30s, told Xinhua.

But Ibrahim Hassan, a 25-year-old man in Gaza, adopts a different position. “I cannot imagine getting married to a woman doing boxing. If I ask her to prepare a cup of tea and she does not like to do so, she might box me,” the young man said with a laugh.