CHACALTAYA, BOLIVIA (AFP) – Bernardo Guarachi’s eyes light up as he reminisces about the glory days of Chacaltaya – once the highest ski resort in the world but now a crumbling relic to climate change in the Bolivian Andes.

“Today, it’s a cemetery,” said Guarachi, pointing to the rusted poles and cables from the old chair lifts.

His eyes scan the 400-metre slope he once shot down at speed on a blanket of snow, now covered only in rocks.

“It used to be full of skiers on Saturdays and Sundays,” said the mountaineer.

Rising 5,300 metres above sea level, Chacaltaya was a popular family weekend retreat for inhabitants of La Paz, just 30 kilometres away.

By 1998, the Chacaltaya glacier had been reduced to just seven per cent of its size in 1940, while it disappeared entirely in 2009. 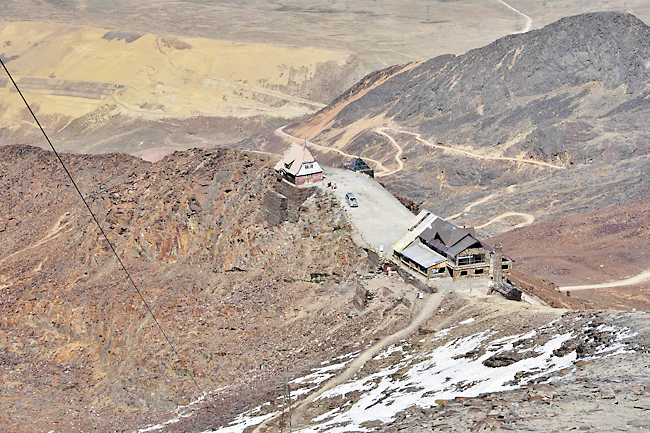 Bolivia has lost around half of its glaciers in the last 50 years and experts said things will get worse as global warming continues.

According to the Andean Glaciers and Waters Atlas, published in 2018 by UNESCO and the Norwegian foundation GRID-Arendal, “the expected warming will provoke the loss of 95 per cent of the permafrost in Bolivia by 2050”, including the loss of almost all its glaciers.

It is a familiar theme for glaciologist at the Mayor de San Andres University Edson Ramirez, who conducted a comprehensive study on the impact of climate change on the Bolivian Andes.

He was also the first person to conduct an inventory of Bolivia’s glaciers, including documenting their disappearance.

“All the similar glaciers to Chacaltaya… are suffering the same process of melting, of death,” said Ramirez.

At the end of the 90s, Ramirez and other scientists measured the thickest part of the glacier: 15 metres.

“We knew it could disappear in the next 15 years,” he said.

It took only 11 years. The glaciers are fed by an accumulation of snow but “the planet’s temperature has risen to a point where we already cannot have snow in these places any more”, said Ramirez.

According to some predictions, the temperature in the Andes could rise by two to five degrees Celsius by the end of the 21st Century.

“We need to take urgent action between all countries to lower the planet’s temperature,” said Ramirez, whose challenge is to preserve what remains of Bolivia’s glaciers.

Guarachi, 67, looks off into the distance towards El Alto, the large satellite town overlooking La Paz, and the cloud of smog hanging over both. “Man has changed a lot for one aim, which is to earn money, lots of money, and he has forgotten about nature (and) the mountains,” said Guarachi.

Bolivia is 80th out of 181 countries in terms of CO2 emissions.

Earlier this year, the South American country of 11 million submitted a proposal to the United Nations (UN) that would see the worst offenders increase by “five to 10 times” their financing for the worst affected countries, as well as greater efforts to reduce carbon emissions.

But Ramirez said that his country cannot be excused of blame, pointing to the forest fires that every year devastate thousands of hectares of the Amazon basin to clear the land for agriculture.

“The effects of the fires also influence the state of the glaciers,” said Ramirez, explaining that the carbon produced is deposited on the ice and accelerates the melting process by reducing the ability of snow and ice to reflect sunlight.

The disappearance of the glaciers could impact the water supply for millions of Bolivians.

During periods of drought, the ice melt would provide up to 85 per cent of La Paz’s water needs. Several times in the last five years its residents have been forced to
ration water.

Farmers on the Altiplano, above La Paz, have also felt the effects.

Offerings and prayers to Mother Earth – a traditional deity – have surged.

Unaffected by the altitude, Guarachi strolls around the ruins of the Chacaltaya resort that was built in the 30s.

“We have to change our mentality… because I’d rather have water than a lot of money. You could have a lot of money but you won’t be able to buy water if the glaciers disappear,” he said.

For biologist Karina Apaza, the environment used to be seen as “an impediment to economic growth, but if you impact it, who are you impacting? Yourself”.