Doncic scored 33 points with 12 rebounds and 11 assists in the Mavericks’ 127-99 victory over the Denver Nuggets.

At 23 years and 263 days old in his 279th game became the second-youngest and second-fastest NBA player to 50 triple-doubles.

Oscar Robertson was 23 years and 32 days old when he achieved the feat in his 111th career game.

It marked the 25th time that Doncic has scored at least 30 points in a triple-double. He’s got four 30-point triple-doubles in 14 games this season.

His Friday exploit came as the Nuggets are without two-time Most Valuable Player Nikola Jokic, who missed a second straight game due to COVID-19 protocols.

“It’s great,” Doncic said of the achievement, albeit without much enthusiasm, adding: “A win is a win.” 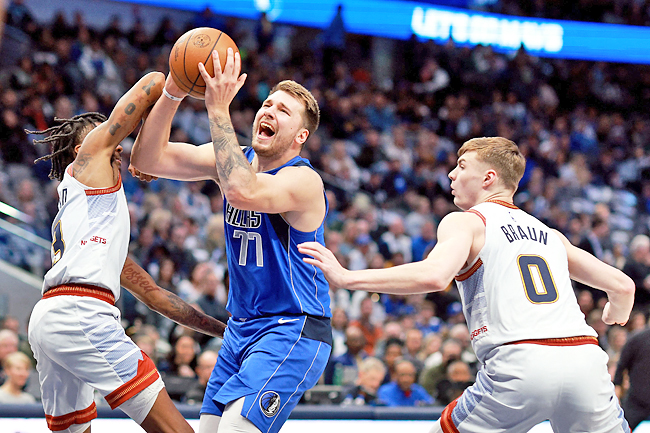 “He’s already rewriting the record books,” Kidd said. “Oscar is pretty special, so to be in there behind Oscar – it just shows you how good he is.”

In New Orleans, the Celtics improved their league-leading record to 13-3, their latest long-range barrage burying the Pelicans 117-109.

Each of Boston’s five starters scored in double figures and each drained at least two of the Celtics’ 20 three-pointers – Derrick White connecting on six.

New Orleans cut a 13-point deficit to six midway through the fourth quarter before the Celtics pulled away again, and Brown said that despite their recent dominance the Celtics can improve their focus.

“Sometimes we get a lead and we let the game get away from us,” he said. “That’s the challenge, to be mature, to be locked in and be focussed.

“Other teams are not going to lay down. They know we got to the Finals last year so they’re going to come with their ‘A’ game.”

The Golden State Warriors, who beat the Celtics in last season’s championship series but have struggled in the early stages of their title defence, rebounded from an ugly loss to Phoenix with a 111-101 victory over the New York Knicks.

“Our defensive effort tonight was finally a little bit better,” said Stephen Curry, who led the Warriors with 24 points and 10 rebounds. “We still believe that’s how we win. We’ve just got to put it together game after game after game.”

In Philadelphia, 76ers centre Joel Embiid scored 32 points and out-dueled Milwaukee big man Giannis Antetokounmpo to lead the injury-depleted hosts to a 110-102 victory over the Bucks.

The Sixers, missing James Harden, Tobias Harris and Furkan Korkmaz going into the contest, lost Tyrese Maxey to a foot injury at halftime.

Maxey had scored 24 points before he limped out late in the second quarter.

Embiid’s 19 second-half points propelled the 76ers past the Bucks, who led 62-55 at halftime.

Antetokounmpo led Milwaukee with 25 points and 14 rebounds. But he connected on just four of 15 free-throw attempts.

In Memphis, Jaren Jackson’s 25 points and 12 rebounds led the Grizzlies in a 121-110 victory over Oklahoma City, but it could prove a costly win after Grizzlies star point guard Ja Morant departed late in the contest with a left ankle injury.

The Cavaliers needed two overtimes to put away the Charlotte Hornets 132-122 in Cleveland.

Darius Garland scored 41 points and Donovan Mitchell added 34 for the Cavs, who saw their 10-point lead erased in the final 52.4 seconds of regulation.

It also went to overtime in Washington, where the Wizards edged the short-handed Miami Heat 107-106.

Bradley Beal scored 27 points, Kyle Kuzma added 21 and Kristaps Porzingis added 20 with 17 rebounds for the Wizards, who withstood a triple-double of 24 points, 10 rebounds and 15 assists by Miami’s Kyle Lowry.

The Utah Jazz came out on top in a shootout with Phoenix, edging the Suns 134-133.