NEW DELHI (AP) – Indians celebrated Deepavali yesterday as bright earthen oil lamps and dazzling, colourful lights lit up homes and streets across the country to mark the Hindu festival that symbolises the victory of light over darkness.

Deepavali, which is a national holiday across India, is typically celebrated by socialising and exchanging gifts with family and friends. Many light earthen oil lamps or candles, and fireworks are set off as part of the celebrations. In the evening, a special prayer is dedicated to the Hindu deity Lakshmi, who is believed to bring luck and prosperity.

Ahead of the celebrations, cities and towns across the country were decked with colourful lights.

Millions of Indians thronged crowded bazaars for shopping, bringing back the Deepavali cheer that was dampened during the last two years due to coronavirus restrictions. 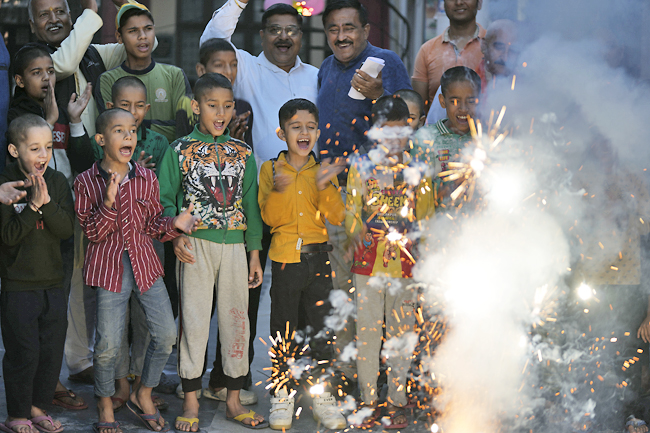 As dusk fell on Sunday, over 1.5 million earthen lamps were lit and kept burning for 45 minutes at Ram ki Paidi, at the banks of Saryu River in the northern city of Ayodhya in Uttar Pradesh state, retaining the Guinness World Record it set last year.

Senior government official Nitish Kumar said that over 22,000 volunteers, the majority of them college students, ensured that lamps burnt for the prescribed time to break the last year’s record of 900,000 oil lamps.

Hindus believe that the deity Lord Ram was born in Ayodhya, where he returned after 14 years in exile. To celebrate his return, people light earthen lamps.

The holy city was decked with fairy lights ahead of the event and a laser and fireworks show illuminated its lanes and river banks. Thousands of residents also lit lamps at their houses and temples across the city.

The stunning spectacle along the shores of Saryu River was also attended by Prime Minister Narendra Modi.

Amid chants of Hindu religious hymns, Modi lit an earthen lamp and performed aarti – a customary Hindu ritual that involves waving lighted lamps in front of an idol.

Earlier, Modi offered prayers at a long-awaited temple of the Hindu deity Ram.

It was Modi’s second visit to the temple since he laid the foundation in 2020 for the construction of the temple.

“Lord Ram’s ideals are a beacon of light for people aspiring for a developed India in the next 25 years,” Modi said during his address there.

Over the past few years, Deepavali celebrations are tinged with worries over air pollution, which typically shrouds northern India under a toxic grey smog as temperatures dip and winter settles in.

Northern India’s pollution woes during the onset of winter mainly stem from vehicular emissions and the burning of crop stubble to clear fields.

But on Deepavali night people also lit up the sky with firecrackers and its smoke causes smog that sometimes takes days to clear.

Some Indian states, including the capital New Delhi, have banned sales of fireworks and imposed other restrictions to stem the pollution.