He shared this during a dinner and night of Philippine music in commemoration of the 123rd anniversary of the Proclamation of Philippine Independence hosted by the Philippine Embassy in Brunei Darussalam at the Songket Ballroom of the Rizqun International Hotel yesterday.

Some 350 guests comprising government officials, the Diplomatic Corps, business sector representatives and members of the Filipino community were also present.

The ambassador, Attorney Maria Lourdes Montero along with the minister and his spouse took centre stage upon arrival for the singing of the national anthems, performed by the Brunei Music Society.

The ambassador conveyed the appreciation of President Rodrigo Roa Duterte to His Majesty for the warm hospitality accorded to the Filipino community in the Sultanate who continue to contribute to the country’s economic and social development. He also expressed confidence that the enduring bonds of friendship and affinity between the two countries shall continue to flourish in the years ahead. 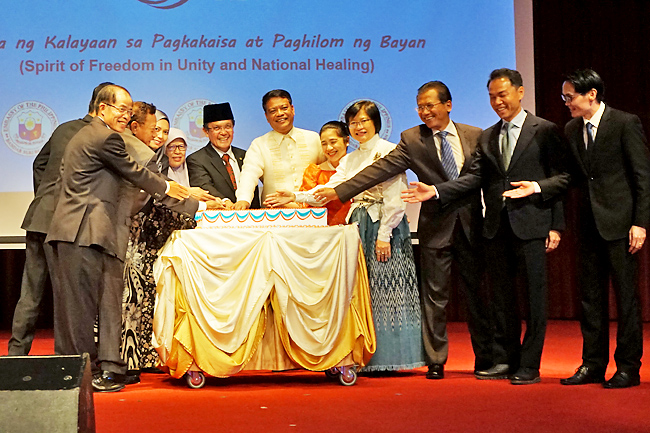 Tokens of appreciation were also presented by the ambassador and Attorney Montero to the minister and spouse.

The ceremony featured a photo exhibit entitled ‘The Abode of Peace: Through the Eyes of Filipinos in Brunei’. The exhibit featured 42 award winning photographs of life in Brunei Darussalam from the Pinoy Shutters Club, a Filipino community association of Filipino professional and hobbyist photographers.

There was also a cultural performance by premiere musical ensemble The Manila Strings, Elite Dancing Coach and Del Mar Virtuoso Music School. The compositions featured reflected the musical heritage of the Philippines and showcased the creative expressions of its people while the songs were works of Philippines National Artists for Music and award-winning Filipino composers.

Handog (A Tribute), performed by the Manila Strings and Marvin Santos, opened the cultural presentation and was accompanied by a video presentation honouring Filipino frontliners around the world.

Anak (Child), a popular song by Filipino composer and singer Freddie Aguilar, was sung in both Filipino and Malay as well as an instrumental rendition of Pangako sa Iyo (The Promise) were performed.

A gift bag containing a plush of “Jolly Bee” from fast-food chain Jollibee Foods Corporation and Philippine-made products and delicacies were given to guests.