The Competition Commission Brunei Darussalam (CCBD) through its Executive Secretariat at the Department of Competition and Consumer Affairs, held a ‘Fighting Bid-rigging in Public Procurement’ workshop series to educate public officials on how to detect and prevent bid-rigging in public tenders.

The workshop is part of the CCBD’s advocacy initiative to promote a competition-aware culture among public officials and foster ethical economic activity, in line with the enforcement of the Competition Order January this year.

The first workshop took place at the Ministry of Health (MoH) with the topic ‘Spot and Stop Bid Rigging’. Thirty officials from various divisions in the ministry attended the workshop. The workshop provided insights on how to detect signs of tender collusion and how to design effective tender documents; procedures to minimise the risk; and the introduction of e-procurement system.

During the opening, the Executive Secretariat of the CCBD said bid rigging, also known as collusive tender, is a serious violation of the Competition Order and after entering interest to tender it is illegal to agree not to compete in a tender. It is the Commission’s priority to prevent bid rigging conducts, noting the potential significant harm to the consumers, the economy as a whole, and the financial burden to the government expenditure. This priority is in line with the national agenda that emphasises on prudent spending and value-for-money public procurement.

Led by two competition experts and practitioner; Senior Fellow to Melbourne Law School Dr Hassan Qaqaya from Melbourne University and Senior Legal Advisor to the Indonesia Competition Commission Mohammad Reza, the workshop discussed the concept of bid rigging and the warning signs so it can be tackled at an early stage. The participants were guided on several preventives measures to strengthen tendering process including enhance bidding transparency such as, adding in declaration clause that require bidders to certify an independent bid.

The workshop also provided an opportunity for participants to have a candid discussion on matters concerning public procurement process and procedures, which may unintentionally hinder competition to achieve value-for-money and favourable for collusion between competitors.

Later, the participants were given a real case as an example from Indonesia to apply the concept they had learnt and worked out a practical strategy on how to uncover bid rigging.

The workshop ended with presentation of posters on ‘Fighting Bid Rigging in Public Procurement’.

The Executive Secretariat applauded the active participation of the MoH officials and encouraged officials to disseminate the information learnt with their colleagues in the ministry, and called for continuous cooperation to spot and stop bid rigging to uphold the culture of value-for-money in public tender in safeguarding public expenditure. 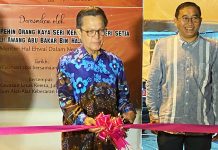