EVANSVILLE, Indiana (AP) — A cat that spent days stuck in a tree in southwestern Indiana is back on solid ground after surviving a dramatic plunge when a tree service company cut the limb it had been clinging to because the feline was beyond its rescuer’s reach.

The cat, nicknamed “Batcat” on social media, was extremely weak and dehydrated on Monday after its ordeal lasting about a week ended in Evansville.

When someone mentioned the cat’s dayslong plight at the High Score Saloon, the owners Jared Neible and Clint Hoskins, pledged USD200 for a tree service to rescue the animal from the tree, the Evansville Courier & Press reported.

A worker for DJ’s Tree Service was raised in a bucket truck into the tree Monday, but the cat was too tired and scared to move, so he used a saw to cut the limb the cat was on. The cat plunged about 21 metres, but appeared fine afterwards.

“It was very scary watching the tree limb go down and the cat come down. But it’s the only way that they could get the cat to come down,” Joshua Diehl, who owns the tree the cat was marooned in, told WFIE-TV. “I can truly say that without a doubt that cats do land on their feet.”

The cat is being cared for at a local veterinary hospital, while the High Score Saloon is raising donations to pay the feline’s veterinary care for dehydration and weakness. 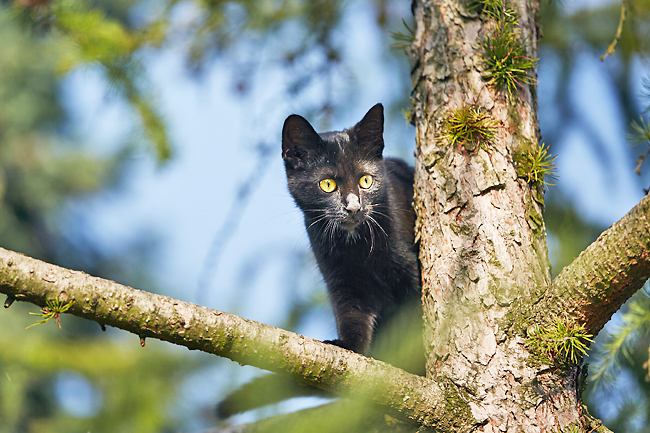