It is easy to overlook and not notice some of the many wonders lurking in the immediate surrounding that many take for granted, from the lush nature found in the depths of the rainforest to the scenic sights of the bustling city centres.

Among these things that easily slip the eyes are the birds that flock in the backyard. They are a sight to behold, especially with the huge variety of bird species that can be found in the Sultanate.

This has driven many to go out of their way to seek out rarely-spotted bird species in city streets and in the depths of the rainforest, as part of a group of bird-watching hobbyists.

I met one such avid bird-watcher, who has been in the hobby for nearly a decade. His name is Husini bin Bakar, also known as ‘Kantalensa’.

He recently hosted a presentation on the joy of bird-watching.

A retiree from the oil and gas industry, Husini started bird-watching and photography in 2012.

“It was a coincidence that I started out as a bird photographer. When I went to Wasan with a few friends, we took photos of birds with our cameras,” he said on how his bird-watching interest developed. 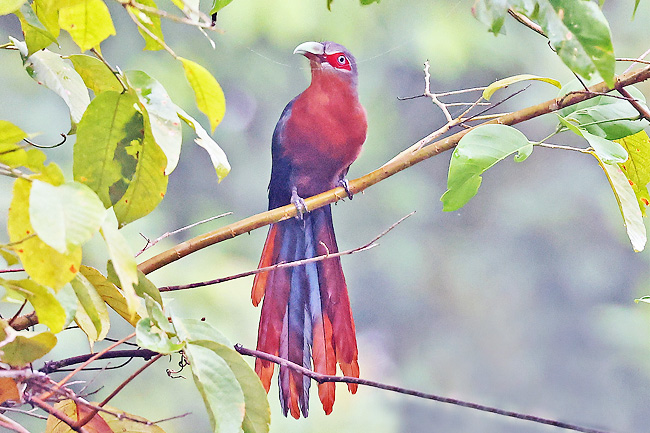 At the time, when attempting to capture some lesser-whistling ducks using a regular lens, he said it produced less impactful photos than what he was actually seeing.

“Because the lens was very short, the ducks looked very small. That’s when I realised that the ability to zoom in with a camera is important,” he said.

“Usually what we perceive as normal birds from afar, when taken up close with a capable lens and camera can turn out to be rather interesting.”

Some of the fascinations he highlighted included the different features and feathers, which attracted him to bird-watching in the first place.

As the number of bird-watching enthusiasts is quite small, Husini and a group of friends formed the Brunei Wildlife Photography Club (BWPC), joined by other like-minded people.

The group has been actively posting photos of not only birds but also other animals in the Sultanate.

“We go out every weekend, because everyone is working during the week, and take photos of birds,” Husini said.

The formation of the group eventually led government agencies to support the cause, with the first Bird Race held in the Sultanate in 2014.

“The Bird Race is a competition where you are given a specific period to identify bird species and the time taken to spot them. Taking photos is one way to identify them without getting too close,” he said.

Not only does the race promote the hobby, he said it also provides an avenue to record and categorise various bird species and disseminate information on how to properly identify bird species and their names.

He said, “The challenge is knowing what bird you’re looking at. To help fellow bird-watchers, we provide books and resources to help them identify the species.

“Back then, we didn’t have software such as Google Lens, as we do now, where we can upload a photo and easily identify the bird.”

Some of the hurdles in bird-watching include acquiring the right camera, the weather, and the perseverance needed to be in the right place and time to capture the shot.

“I think the most challenging aspect of bird-watching is finding the birds themselves. You need to be patient. You may spot one particular bird species at a specific location one day, and when you come back the next day, it may have flown away. It is very unpredictable,” he said.

Despite the challenges, Husini and many avid bird-watchers continue to go out of their way to find and capture different bird species in their natural habitat with their cameras.

For them, the moment of spotting a particular bird species is what keeps them going.

Having seen and photographed more than 345 bird species in Brunei, Malaysia and Singapore, Husini is still actively travelling to remote areas in the Belait District to hunt down more with his camera.

In addition to the BWPC, there are many bird-watching groups such as the White-Crowners birder group, which Husini is also a part of.

Husini enjoys helping others get into the hobby.

“When friends need help to identify birds they have captured with their smartphones, I share photos from my records and give them the details.”

The COVID-19 pandemic may have put bird-watching activities on hold, however, the interest never strayed, especially among foreign enthusiasts, who are keen to learn about the different types of birds in the Sultanate.

Husini has authored a book Colourful Feather: Selected Birds of Brunei and Borneo, printed by Brunei Press Sdn Bhd and is available at bookstores nationwide.