The Service Charge (CaP) will only be imposed on each vehicle travelling through all land control posts in Brunei Darussalam and not per person from December 12.

The minister said, “With the consent of His Majesty Sultan Haji Hassanal Bolkiah Mu’izzaddin Waddaulah ibni Al-Marhum Sultan Haji Omar ‘Ali Saifuddien Sa’adul Khairi Waddien, Sultan and Yang Di-Pertuan of Brunei Darussalam, the COVID-19 Steering Committee would like to announce that the Ministry of Finance and Economy through the Royal Customs and Excise Department updated the service charge payment rate through the Exit and Entry System, whereby now BND3 is charged for one-way, for everyone travelling through the land control post in Brunei Darussalam.”

Passenger vehicles with more than 25 people including the driver such as buses will be charged BND10 per vehicle for a one-way trip.” 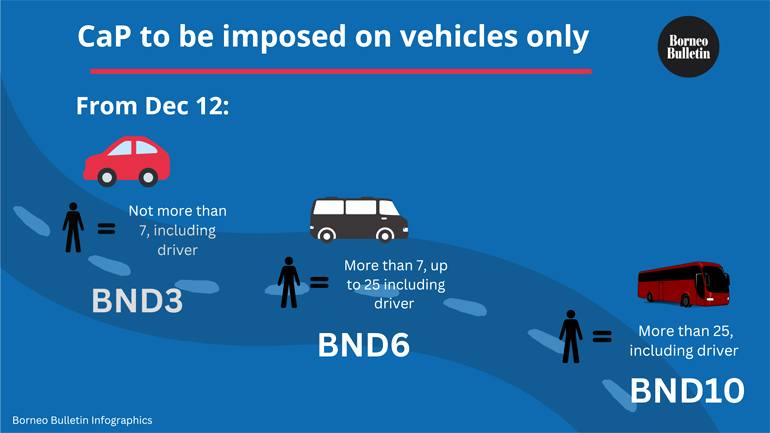 Meanwhile, members of the public planning to cross the border on or after December 12, 2022, but have already made the CaP earlier through EES, will be refunded by the Royal Customs and Excise Department.

To ensure a smooth travel across the border through the land control post, members of the public are advised to make registration, application, and payment of service charge through EES system (https://login.bdnsw.gov.bn/ees/user/login) and obtain a QR code early before starting the trip.