CNA – Candlelight vigils and rallies were held in South Korea yesterday to commemorate the 156 people killed in a Halloween crowd crush, with public anger growing over one of the country’s deadliest peacetime disasters.

The victims, mostly young people, were among the estimated 100,000 that had flocked to the capital Seoul’s popular Itaewon nightlife district to celebrate the first post-pandemic Halloween.

South Korean law enforcement officials have conceded that there was insufficient safety planning for a crowd that large, and opposition politicians have accused President Yoon Suk-yeol’s government of not taking responsibility for the disaster.

Reflecting that anger, a woman identified by local media as the mother of one of the victims was seen ripping apart the floral wreaths left by the president and Seoul’s mayor at a memorial on Friday.

“What’s the point of (these flowers) when they couldn’t protect (our children)? Think about it,” she was seen saying in footage broadcast by local TV stations.

“What’s the point of standing next to these (wreaths) when you let our babies die?”

Uniformed police officers were then seen escorting the woman away from the memorial, located outside Seoul City Hall.

President Yoon on Friday joined other top officials – including the national police chief and the interior minister – who had apologised over the disaster.

“As a president who is responsible for the lives and safety of the people, I am deeply saddened and sorry,” he said. 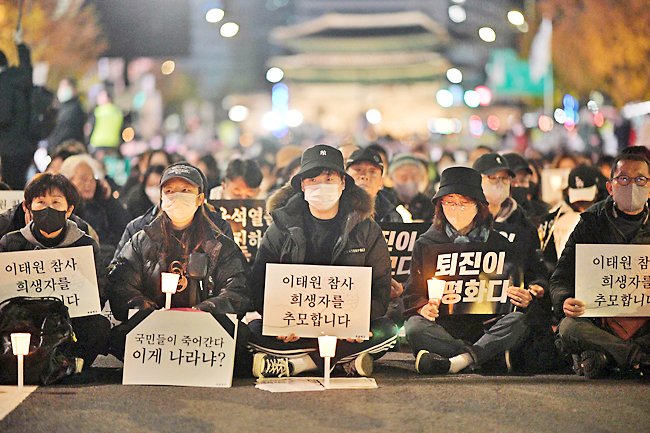