STEPHENVILLE, NEWFOUNDLAND (AP) – The leaders of Germany and Canada said on Tuesday a new hydrogen pact will kick-start a transatlantic hydrogen supply chain, with the first deliveries expected in just three years.

Prime Minister Justin Trudeau and German Chancellor Olaf Scholz signed the deal in the port town of Stephenville, Newfoundland. A Canadian company has plans to build a zero-emission plant that will use wind energy to produce hydrogen and ammonia for export.

Hydrogen is seen as a component of Europe’s plan to reduce its reliance on Russian fossil fuels.

“The market case and the need to scale up was coming and wasn’t quite here yet,” Trudeau said.

Scholz said Canada is Germany’s partner of choice as the country moves away from relying on Russia to supply energy.

“Our need might be even higher under the new circumstances,” Scholz said.

Natural gas prices have surged as Russia has reduced or cut off natural gas flows to a dozen European Union (EU) countries, fuelling inflation and raising the risk that Europe could plunge into recession. Germans have been urged to cut gas use now so the country will have enough for the winter ahead.

The Canadian government on Tuesday signed separate agreements with Volkswagen and Mercedes-Benz that will see the two German auto manufacturers secure access to Canadian raw materials for batteries in electric vehicles. The agreements include Canadian cobalt, graphite, nickel and lithium. 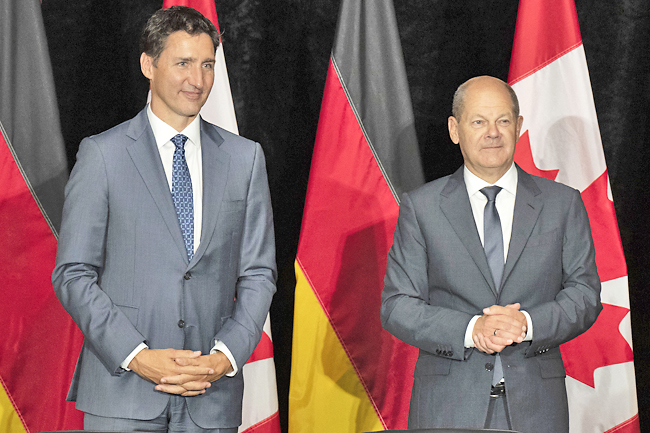