ANN/JAPAN NEWS – Known as the smallest inhabited isle in Okayama Prefecture, Matsushima island is located just a stone’s throw from the prefecture’s Mt Washu in Kurashiki City. Nature was already beginning to reclaim the abandoned island when a young man moved there from Tokyo to become its sole resident.

Takuji Wakimura, 25, is now working not just to set up his own life on the isle, but to revive the place as a vacation spot. This may sound like a story full of dreams and hopes, but in reality, it is a litany of hardships, he said.

I visited Wakimura on the island to get a glimpse of his down-to-earth lifestyle.

The less than 10-minute ride from the city’s Tanoura Port was not even enough time to settle myself on the boat. “Here we are. My house is at the end of this,” said Wakimura, who drove the craft.

Beyond the small pier where we landed, I could see an area overrun with grass and weeds.

I followed Wakimura up a narrow concrete slope lined with abandoned houses on both sides.

We eventually arrived at the site of two old houses, around which the weeds had been cut.

One, a two-storey house, is his residence, and the other, a one-storey house that he plans to open as an inn, is under renovation. 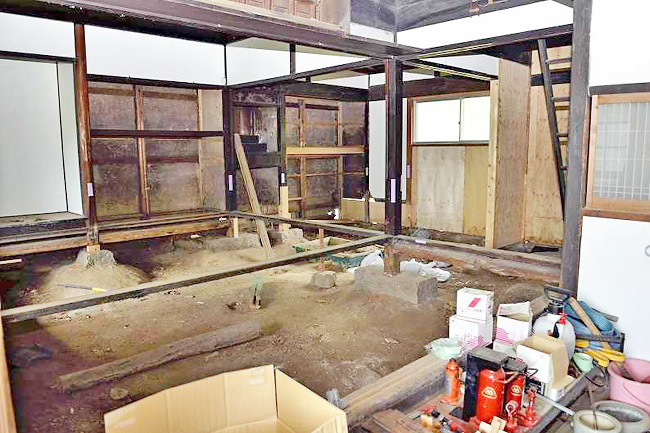 He leased both houses last October through an acquaintance of the owner, who lives in the city’s Kojima district.

Wakimura showed me the inside of the one-storey house, which he said is more than 100-years-old. All the flooring had been removed, and some of the walls and pillars had been replaced with brand-new lumber. With the help of local carpenters, the renovation work is proceeding smoothly.

He hopes to get the work done by the end of the year and open it before the Golden Week holidays next year.

“I want to make it a place where people can enjoy a barbecue, do some fishing and experience the island’s relaxing lifestyle,” Wakimura said.

Originally from Kobe, Wakimura worked for a year at a tech company in Tokyo after graduating from a university in Kochi Prefecture.

He then left the job and moved to Okayama Prefecture in August 2020 as part of a government-sponsored scheme for dispatching so-called Local Vitalisation Cooperators to regional areas.

Pursuing his dream to do business in the countryside, where he could enjoy a relaxing lifestyle, he chose to live in Kurashiki, a city close to both his hometown of Kobe and the Shikoku region, where he spent his college years.

At first, he commuted from Kurashiki’s Kojima district to the island, where he took part in various projects, such as cultural activities conducted by the city government at a building that was once an elementary and junior high school.

However, in 2021 after the last resident left, the island quickly went to pot, with the lack of human care allowing weeds to consume the roads. Searching for a way to save the island, Wakimura hit upon the idea of opening an inn to draw people to the island.

When he started work last February, the old houses he leased were surrounded by weeds up to five or six metres tall, keeping him even from reaching the buildings.

Having gradually cleared away the weeds and woody growth, he was finally able to get close to the houses, but another problem awaited him.

Tree branches from the adjacent hill were growing through the house walls, and weeds were growing out of the roof tiles.

The houses were also badly damaged inside, with some of the tatami mats and pillars having rotted.

Still, Wakimura did not give up.

He piled up about 700 sandbags at the back of the houses, where the hillside was on the verge of collapsing, replaced a pillar where the base had rotted out with a new one and changed out mud walls for boards.

He went to town over and over again to buy materials and transported them back by boat.
With no money to spare, he had to cut back on living expenses.

Although the island had electricity and running water, he lived without air conditioning even in the middle of summer. It was so hot that it often woke him from his sleep, he recalled.

“I enjoy the hard work because it’s to achieve my goal. I do this because it’s what I want to do,” Wakimura said with a smile.

More people who have learnt about his project are lending him a hand. In addition to renovating the old houses, he is also having a go at wakame seaweed fishing, which he is learning from a local fisherman as one way to make ends meet. Even if he can open the inn, there is no prospect of running the business in winter.

“Right now, I’ve taken advantage of being able to do what I want to do on the plot of land that I’ve leased on this island,” said Wakimura. “It’s not easy, but I want to put down roots on Matsushima and make a living.”

Matsushima’s lone resident has no intention of quitting before he brings life back to the isle’s shores.

Measuring 1.2 kilometres in circumference, the island has an area of about 0.08 square kilometres.

It once flourished as a prosperous fishing community, boasting more than 100 inhabitants.

The population then went into a long decline, and the last islander moved out in 2021.

There is no regular ferry service to the island.