Bugged by cicadas? These playful images may help

THE WASHINGTON POST – When five-year-old Julia Ware spots a spider, she checks out the colour of its fangs. She picks up caterpillars without hesitation and uses her mum’s fancy camera to take close-up pictures of bugs. But when hundreds of huge, hook-handed cicadas began coptering around her backyard in Arlington, Virginia, Julia was not a fan. At least not immediately.

“They have red eyes,” she explained.

Julia’s mom, Oxana Ware, had the opposite reaction. “I thought they were kind of cute,” she said.

A professional photographer, Ware captured a beautiful close-up of a cicada one recent Friday. The shot, she said, was well-executed, but it looked just like all the other cicada photos people were taking. So she picked up a toy firetruck her son had abandoned on the lawn, put a cicada inside and suddenly realised that Brood X aren’t ordinary bugs – they’re the undiscovered Kate Mosses of the insect kingdom.

“They have a lot of charisma,” Ware said.

After picking up Julia from school, Ware enlisted her daughter’s help in building a miniature set. Julia suggested a pool scene. 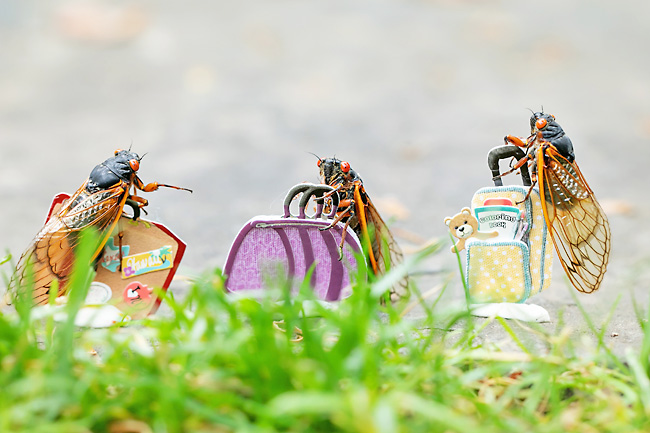 “My daughter found a little life ring,” she said, “and I’m like, ‘Okay, we’re gonna have a cicada chill in a swimming pool. It’s the perfect size, what can go wrong?’ “

Turns out, cicadas hate water. The little guy sank and dragged the life ring down with it. (The bug was Okay, if a little stressed.) The mother-daughter duo regrouped and decided to go with a drier concept – a beach scene, which they constructed using a few repurposed Shopkins toy accessories and a handful of sand from a neighbour’s sandbox.

Blithely unconcerned about how much work had been put into the set, the cicada refused to stay put in its lounge chair. It settled down only when Julia gave it a toy milkshake.

“They really like to hook onto things or hang from things,” Ware said. “So that’s how I built my sets from then on.”

Ware’s cicadas have competed in the Olympics (archery, pole vault and table tennis), performed at a circus (flying trapeze), and even received a coronavirus vaccine. (The critters opted for the J&J shot, she explained, because they probably won’t be around for a second dose.)

What’s next for these adventurous insects? Perhaps a base camp on Mount Everest.

“Why not? They have nothing to lose. They only live a few weeks,” Ware said.

She applies this YOLO philosophy to her own life. A few years ago, she quit her job at the World Bank to become a full-time stay-at-home mum and a part-time photographer. Her first photography clients were new parents, but she didn’t want to take typical baby pictures. So she made one-of-a-kind props, including soft toy lambs, plush wool wreaths, and delicate floral headbands. Ware advertises only by word of mouth, and her calendar quickly filled up.

Her last photo shoot before the coronavirus pandemic hit was with Nina Sheppard’s seven-day-old daughter.

“Oxana loves babies – the way they smell, the way they look,” said Sheppard, who also lives in Arlington. “And she’s always looking to be more creative. That’s what got her from babies to bugs.”

According to Ware, newborns and cicadas have more in common than you might think. They’re both a little dazed, having just emerged from cosier environs into the bright, noisy world. Both creatures aren’t, objectively, all that attractive, she said, but their haplessness makes them adorable. And although they don’t have very distinct personalities, their blank-slate nature makes them compelling photo subjects.

“Without significant editing and knowing what to do with them, they don’t look that cute at all,” Ware said of the babies and the bugs.

Cicadas are somewhat easier to work with than newborns, she said, but – to be fair – babies rarely wander off set and get eaten by birds.

After Ware posted her pictures on the NextDoor neighbourhood app, she got an unexpected reaction: People who had been dreading the cicada emergence said that her photos softened their stances.

“I hated cicadas. They are so big and gross, but when I saw Oxana’s photos, I saw them in a different way,” said Sarah Gmyr, an Arlington-based government contractor. “She created an opportunity to make a connection with these insects because she made them relatable. I mean, they’re just like us, going to the beach, getting vaccinated.”

Ware’s project also helped her kids warm up to the bugs. Now Julia doesn’t hesitate to pick them up; Ben, four, gives them rides in his Tonka trucks; and Catie, two, claps with glee when her mom hangs a few cicadas on her stroller.

Even the cicadas seem to be into it.

“Every morning, there are 20 cicadas lined up on the fence,” Ware said, “and I think, ‘Okay, these are the ones that want to be photographed today.’ I check their temperament and see if they have any skills or special interests and cast them accordingly.”

Before releasing her models back into the wilds of Arlington, Ware warms them in her hands and wishes them well. “I really have a lot of sympathy for them,” she said. “It’s tough out there.”