BSRC FT that came out unscathed in the battle of the top three teams in the recently concluded DST Premier League, yesterday night advanced to the DST FA Cup quarters after a 4-2 victory over Tabuan Muda at the Track and Field of the Hassanal Bolkiah National Sports Complex.

The Belait-based side became the first team to reach the last eight of this year’s competition.

Tabuan Muda emerged as runners-up in the DST Premier League on February 26 while BSRC FT settled for third place despite defeat in the last day of the season.

Tabuan Muda looked to make an opportunity from a corner inside the opening 10 minutes. From the ensuing set-piece, striker Md Aminuddin bin Haji Masri could not make the crucial touch. His subsequent shot fared better but the ball brushed against the post.

Tabuan captain Daniyal bin Mohd Zinin made a good run and lets loose a firm drive from outside the box after cutting inside a BSRC defender.

With calls from a Tabuan player for a raised flag ignored, BSRC’s Herman bin Hasnal bursts clear but his shot only found the goalkeeper.

The Tabuan and BSRC players engaged in a battle of headers after a cross was whipped in which led to the goalkeeper to palm the ball away to ensure it did not creep into the top corner.

Instead, the ball fell kindly to Mohd Iqmal Wafi bin Mohd Benny Boey who had the simplest of tasks of guiding the ball into goal.

Md Aminuddin had an opportunity to help his team restore parity when he lobbed the BSRC goalkeeper but the ball did not go down in time and went out of play.

The second half provided a barrage of goals with four on show in the last quarter of the game.

Abdul Halim deservedly got his goal in the 65th minute after a close shave of pulling a goal worthy of a place in this season’s collection of fine strikes. He doubled his tally 10 minutes later as BSRC went into cruise control.

Tabuan, who went through to the last 16 stage of the competition as one of the playoff losers, pulled one back through Md Aisan Aizuddin.

Nurhazwan Khan Asmah Khan has been one of the game’s standout players for BSRC and he added a layer of comfort to the score-line after finding the target in the 84th minute.

Md Aisan Aizuddin netted a late consolation but the game was already beyond their reach. 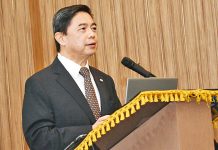