LA MISION, VENEZUELA (AFP) – Denis Reanez was looking through her daughter’s things when she found a handwritten song she had been penning on a sheet slipped inside her bible.

But Eliannys Martinez would never sing it. She was murdered on February 21 in La Mision in Venezuela’s western Portuguesa state, aged just 17 when she became one of the two victims of a sexual predator who sowed terror in the village of 5,000.

Murders of women have surged in Venezuela in the past year, and the killings in La Mision have embodied the fear, pain and anger that many in the Latin American country have felt as a result.

“They found her dead, no clothes, face down, her mouth open, it was horrible. It fell like my chest was being torn open,” said a tearful Reanez about her daughter.

The last time Reanez saw Martinez, the oldest of her eight children, was the morning of her murder, as they sat side by side in church.

Afterwards, Martinez – who played the keyboard – stayed behind with friends to rehearse. She never returned home. 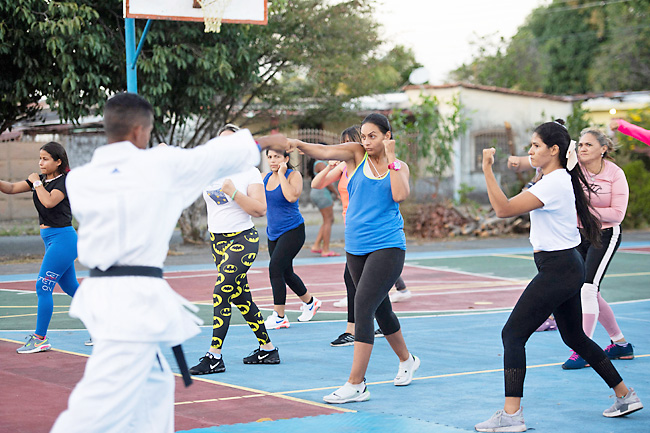 Her grandfather Pedro Reanez went out into fields of beans and tomatoes to call out her name over and over again.

Acting on advice from police, the family searched the abandoned sheds of a former tobacco factory now covered with vegetation.

Martinez was known to use a shortcut along a sandy path that passed by the dilapidated buildings and where many people would stop under the shade of mango trees to catch a telephone signal.

That was where she was killed. When her grandfather found the body, he covered it with his shirt to protect the crime scene before police arrived.

“The shoes were placed” next to her, and she had broken “purple nails”, he remembered.

The very next day, a few blocks away, 20-year-old Eduarlis Falcon was found dead.

She disappeared the day before, after heading to the gym some three kilometres from her home.

“She didn’t deserve this,” said her mother Mileidys Torrealba, 39, whose voice was weak from crying.

In her phone, she has some photos of her daughter’s last birthday celebration. Paper flowers arranged in the shape of the number 20 adorn a piece of furniture next to Falcon’s bed, from the celebrations last September.

The killer was arrested on February 27, after he was turned in by his wife, and faces the maximum 30-year sentence.

The brutality of the two killings on successive days in such a small village gained national attention and sparked protests against violence against women in Portuguesa and the capital Caracas.

In the first two months of this year, 51 women were murdered in Venezuela, according to the national assembly, which on March 2 agreed to discuss reforming a women’s rights law.

In the last week of February alone there were five killings, including a 33-year-old in Portuguesa killed by her ex-partner.

A teenager in the capital Caracas was also murdered by her boyfriend. In both cases, the man had killed after the woman tried to end the relationship.

Last year, during the coronavirus pandemic, 256 women were murdered – an increase of more than 50 per cent on the previous year.

Some NGOs believe the rise in murders is linked to the pandemic confinement that has forced vulnerable women to spend more time at home with their abusers.

Most victims were between 16 and 40 years of age, according to an association monitoring femicide.It amounts to 8.5 women killed per million inhabitants in 2020.

In Mexico, one of the countries worst affected by violence against women, that figure is 7.4, according to official figures.

Most are “intimate femicides that happen at the hands of partners, ex-partners or family members,” said Zambrano, who works with the femicide monitor group and fears that many such murders go unreported.

Attorney General Tarek William Saab said his department has processed 600 murders of women since 2017, half of which were solved.

Back in La Mision, the streets have been deserted at night.

Francisco Saavedra, a karate instructor, and friends have organised self-defence classes for women on a sports court.

Around 30 women and children have been put through their paces learning to punch, kick and elbow strike.

“We have to break the fear because fear paralyses us,” said Yasberlys Almeida, 35, after taking part in a class.

“It’s very worrying going out into the streets and not knowing if we’ll return home.”