Brunei Darussalam’s total trade was valued at BND2,227.4 million in August 2021, showing an increase by 60.9 per cent from BND1,384.6 million during the same month last year.

Meanwhile, for month-to-month changes, total trade for August 2021 decreased by 11.1 per cent compared to July 2021, a press statement from the Department of Economic Planning and Statistics (DEPS) said.

In terms of commodity by section, mineral fuels were the major contributor to Brunei Darussalam’s exports (78.8 per cent), followed by chemicals (19.8 per cent), and machinery and transport equipment (0.5 per cent). 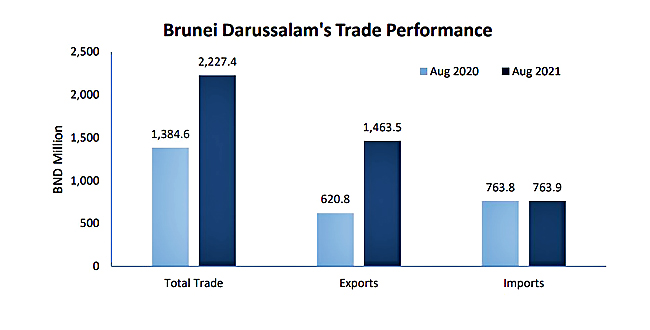 The main exports market in August 2021 was Japan (25.1 per cent) followed by China (19.6 per cent) and Singapore (18.8 per cent). The largest export commodity to Japan and Singapore was mineral fuels, while exports to China was chemicals.

For imports, the total value increased to BND763.9 million (August 2021) from BND763.8 million (August 2020) mainly driven by an increase in imports of mineral fuels largely used as input for the production of petrochemical products.

In the end use category, imports of intermediate goods accounted for 58.4 per cent of the total imports, followed by capital goods (37.3 per cent) and consumption goods (4.3 per cent). For imports by trading partners, the highest share was from Malaysia (20.4 per cent), followed by Saudi Arabia (17.9 per cent), and Colombia (13.1 per cent) with the largest import commodity being mineral fuels.

The IMTS full report for August 2021 is available at the DEPS’ website at www.deps.gov.bn.