In the third quarter (Q3) of 2022, Brunei Darussalam’s gross domestic product (GDP) by economic activity was mainly contributed by the industry sector which was about 66.4 per cent. This was followed by services sector by 32.5 per cent and agriculture, forestry and fishery sector by 1.1 per cent.

The Sultanate’s GDP at current prices in Q3 2022 was valued at BND5.8 billion compared to BND4.7 billion in Q3 2021. The oil and gas sector, comprising of oil and gas mining and manufacture of liquefied natural gas (LNG), accounted for 51.7 per cent of the total gross value added (GVA). Meanwhile, the non-oil and gas sector, which includes downstream activities such as the manufacture of petroleum and chemical products, contributed 48.3 per cent of GDP.

Meanwhile, GDP value at constant prices recorded a growth of 0.9 per cent year-on-year.

The non-oil and gas sector remained positive with an increase in the subsectors such as downstream, finance, air transport, wholesale and retail trade, and fishery. 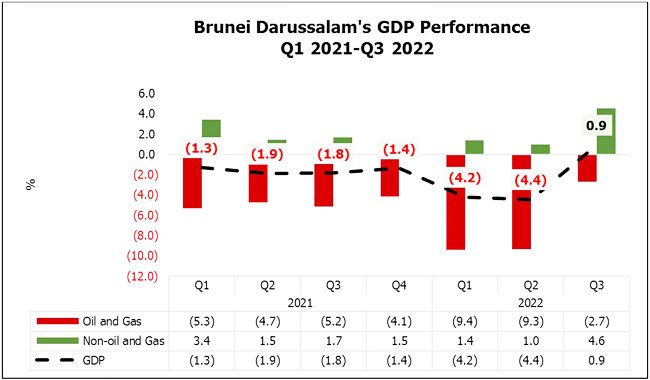 The increase in the wholesale and retail trade subsector was due to the rise in domestic demand in line with the reduction in control measures following the cessation of the COVID-19 Early Endemic Phase as opposed to the third quarter (Q3) in the previous year, in which most movement restrictions were reinstated to control the spread of COVID-19. The increase in this subsector was also in line with the rise in retail sales mainly driven by an increase in sales of textiles, wearing apparel and footwear cent, sales of hardware, paints and glass in specialised stores and sales at petrol station.

The full report is available from deps.mofe.gov.bn.