Brunei Darussalam national winger Faiq Jefri Bolkiah (pic below) has recently been handed a market value of EUR200,000 according to transfermarkt, a German-based football website containing information such as transfer news, market value, statistics and fixtures.

The figure makes him the most valuable player in Brunei Darussalam national team with a number of his teammates including Awangku Fakharazzi, Abdul Mu’iz bin Sisa, Najib Tarif and Azwan Ali Rahman being valued at EUR50, 000.

Faiq is currently in the ranks of Primeira Liga outfit CS Maritimo, making him the first Bruneian to sign for a professional Portuguese club.

However, the Brunei international is yet to make a single league appearance in the Portuguese top flight since his arrival in September 2020.

The 22-year-old received a massive boost of receiving playing opportunities after he was assigned the number 14 jersey last November. 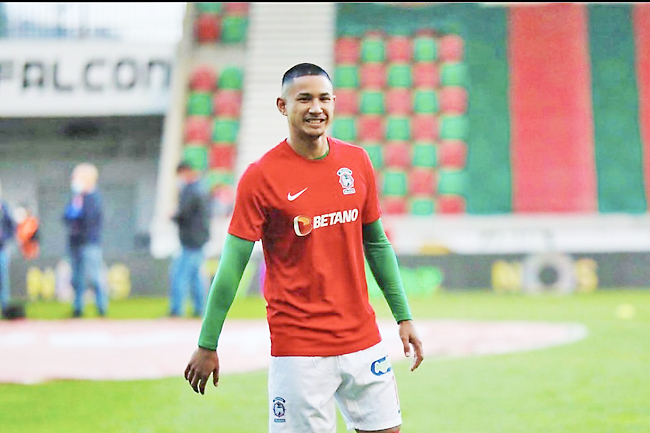 Having endured the wait for his senior debut, Faiq turned out for the under-23 side in a 3-3 draw against Sporting CP in the Liga Revelacao Under-23 last December.

Earlier this month, he was in contention to make his first appearance for the senior squad after he was named in the substitutes’ bench during the 2-0 defeat against Sporting CP.

The Green-and-Reds will be looking to steer to safety when they face relegation-threatened Tondela in a crucial encounter.

Faiq moved to Portugal following the end of his spell with English Premier League side Leicester City last summer.

On the international stage, he last represented the Brunei Darussalam under-23 team at the Southeast Asian (SEA) Games in Manila, the Philippines in December 2019. Besides Faiq, the top three valuable players in their respective national teams affiliated with the Asean Football Federation (AFF) are Philippines’ Neil Etheridge, Thailand’s Chanathip Songkrasin and Timor Leste’s Patrick Fabiano.