THE Brunei Veteran Basketball Team of 50 years and above will be taking part in the 2019 International Invitational Basketball Tournament in Kuala Lumpur from January 10-12.

Organised by Persatuan Penduduk Pandamaran P Kelang, the tournament will see the participation of teams from China, South Korea, Timor Leste, the Philippines, Indonesia, Thailand and the host Malaysia.

This is the first time that Brunei Darussalam are sending a team to the tournament, aimed to foster ties among veteran basketball players in the region.

A friendly game between the veteran team and media team took place following the handing over of sponsorship. The media team were leading 52-40 in the end of the third quarter before power disruption ended the match abruptly. 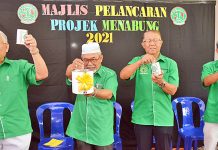