The two national swimming record holders will compete in four events – Muhammad Isa in 50m and 100m breaststroke, and Christian Nikles in 50m and 100m freestyle events. The FINA swimming competitions will be held at the Nambu University Municipal Aquatics Center in Gwangju.

Both athletes are looking forward at new records. Muhammad Isa broke the 50m breaststroke record, with a time of 30.07s, during the 27th Brunei Age Group Championships in April 2019, while Christian brought home a gold medal at the Arafura Games in Darwin, Australia also in the same month.

This year’s World Championships assemble a record number of National Federations with 194 nations sending their best athletes to compete in Gwangju, Korea. The previous best was achieved in Kazan, Russia, in 2015, with 184 countries.

The motto of the 18th edition ‘Dive into Peace’ shows Gwangju’s engagement in creating unification that promotes positive values across the world. 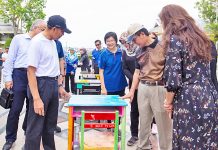 Bringing creativity to the table