Brunei Darussalam squash player Lim Kok Sheng moved to the quarterfinals of the men’s open consolation event in the 3rd Squash Thailand Open after he defeated Thailand’s Nuircha in straight sets 3-0 (11-4 11-7 11-4) at the Ambassador City Jomtien in Pattaya, Thailand yesterday.

The Bruneian took the opening set after hitting a powerful shot straight into the centre of the court which his opponent could not retrieve from despite efforts to stretch for a return.

In the second set, Lim made it difficult for his Thai competitor to return a shot in a move which further extended his lead to 7-3 but the latter got closer with two successive points.

However, any thoughts of a comeback was faded as the Bruneian quickly moved into a two- set lead which he closed out as Nuircha was not able to get his shot away.

Continuing his rhythm from the opening two sets, Lim fashioned two creative finishes including one deft touch which helped lower the direction of the ball into the floor to open up a 6-2 lead.

The Bruneian was awarded match point after Nirucha could only hit his shot into the left wall of the court, thus ensuring victory for Lim.

Lim’s reward for progressing into the last eight is a tie against Indonesia’s Dheny Chalvin, who came out on top in his match against Taiwan’s Kao Chu Feng (11-4 11-4 11-4).

Both Lim and Mohd Dzulazmi were handed tough draws in the first round against players seeded in the top 16.

There were no upsets for the number one seed Japan’s Tomotaka Endo who won both his matches, booking a place in the men’s open quarterfinals where he will meet number 5 seed Malaysia’s Mohd Farez Izwan. 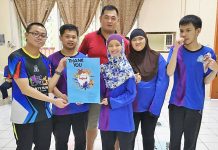