The highly anticipated Brunei Run in conjunction with the United Nations (UN) International Day of Sport for Development and Peace took centre stage in Bandar Seri Begawan for a second edition yesterday.

Runners were able to enjoy the iconic 622-metre-long bridge after passing through Taman Mahkota Jubli Emas and experienced the beat of the city.

The route offered breathtaking views of Kampong Ayer on the Brunei River, the Royal Regalia Museum and the Omar ‘Ali Saifuddien Mosque.

As one of the first running events in the New Year, the competitive races brought together different segments at all fitness levels within the community.

Chairperson of Brunei Run 2021 Awangku Danny bin Pengiran Tajuddin said, “We are delighted to play host the second edition of Brunei Run with an objective of bringing the local and global wellness communities together with safety as our priority for participants.”

He added, “With a maximum limit of 250 participants for this edition due to COVID-19 preventive measures and guidelines for mass gatherings, the response from our participants was very positive and we are glad the event went well.”

Khairul Anuar expressed satisfaction in winning the race as his training paid off. He was initially a part of the scheme under the guidance of former national coach Suleiman Nyambui. The local runner will also be looking to better his time in future races.

Meanwhile, women’s 10-kilometre winner Pacharee was equally pleased with her performance and enjoyed the route in her first appearance in the Brunei Run. The runner has previously represented her country Thailand as a national athlete in multiple editions of the regional multi-sport meet the Southeast Asian (SEA) Games including Kuala Lumpur in 2001 and Hanoi in 2003.

Parachee took part in the marathon event in the 2007 SEA Games on home soil in Nakhon Ratchasima in Thailand before taking part in her final SEA Games in 2009 in Vientiane, Laos.

She is also currently the national record holder for 5,000-metre with a time of 17:09s in the 2003 Southeast Asian Games in Hanoi, Vietnam.

The former SEA Games competitor is also looking to build on her form in future races in the country.

Men’s five-kilometre winner Shazwi was similarly pleased with his performance and added that his training routine included a recovery run in the afternoon. 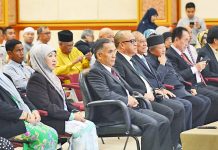