BRUNEI Darussalam’s under-21 netball team fell to an 84-25 defeat to Malaysia in their third Group ‘B’ fixture of the Asian Youth Netball Championship 2019 in Kashima, Japan yesterday.

Five-time winners Malaysia was the finalists from the previous edition and is one of the challengers aiming to wrestle the crown from defending champions Singapore.

The Royal Young Bees began their campaign in a 58-38 loss to Hong Kong – who finished third in the previous edition – before they bounced back with a 46-39 win against Japan in the second group game.

Brunei will play Taiwan today and either side will fancy their chances to finish third in the group.

Meanwhile, the other results saw Singapore romp to a 100-4 win over South Korea with Thailand also similarly making light work of Nepal in a 79-8 victory.

The team that finishes fifth from each group will only play once in the ninth and 10th place play-off following the completion of the group stage matches.

Jane Searle’s charges will aim to better their sixth place finish during their last participation in the Asian under-21s when they narrowly lost 38-34 to Thailand.

“Today, Asia is the largest growing region in international netball. This tournament is a testament to our continued growth,” said member of the Asian Netball Federation (ANF) during the opening ceremony.

Organised by the Asian Netball Federation (ANF), the Asian Youth Netball Championship serves as a platform for teams at under-21 age group to take part in the competition in the Asian region. 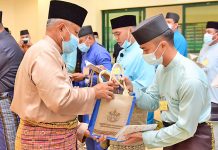