In the third quarter (Q3) of 2020, Brunei Darussalam’s gross domestic product (GDP) at current prices was estimated at BND4 billion compared to BND4.2 billion in Q3 2019. The oil and gas sector, comprising oil and gas mining and manufacture of liquefied natural gas (LNG), was valued at BND1.8 billion which accounted for 45.4 per cent of the total gross value added (GVA). Meanwhile, the non-oil and gas sector, which includes downstream activities such as the manufacture of petroleum and chemical products, contributed 54.6 per cent with a GVA of BND2.2 billion.

The growth in the non-oil and gas sector was mainly due to the downstream activities following the new production of petroleum and chemical products, with a GVA of BND208.9 million at constant prices. 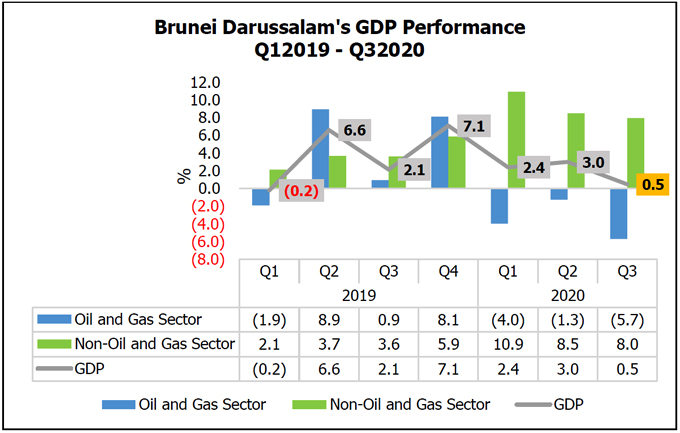 However, the services sector declined by 0.3 per cent due to a decrease in sub-sectors such as government services, air transport and finance. The COVID-19 outbreak has adversely affected the air transport sub-sector, which declined by 92.1 per cent due to reduced travel operations. Meanwhile, a contraction in the finance sub-sector by 4.4 per cent attributed mainly by the decline in the banking services activities.

Although the overall services sector recorded a decrease, several sub-sectors under this sector showed improvements such as communication (23.8 per cent), water transport (22 per cent), wholesale and retail trade (4.6 per cent), health services (5.3 per cent) and real estate and ownership of dwellings (2.3 per cent). The growth in the wholesale and retail trade subsector was attributed to an increase in the domestic demand as travel restrictions remain effective.

By expenditure approach, GDP growth was mainly attributed to an increase in domestic demand, particularly household final consumption expenditure by 14.1 per cent and gross capital formation by 9.5 per cent particularly private investment. Meanwhile, external demand (exports of goods and services) also recorded an increase of 0.3 per cent.

GDP is a measure of the total value of goods and services produced in a particular period after deducting the cost of goods and services used up in the process of production. The report for the Q3 2020 is available from the Department of Economic Planning and Statistics’ website: www.deps.gov.bn.