In the past five years, bilateral trade volumes between Brunei Darussalam and China increased by 2.5 times. China’s investment in the Sultanate has jumped by nearly seven times. During the pandemic, cooperation between both countries showed strong resilience, and the trade volume has grown, repeatedly recording new highs.

Ambassador of China to Brunei Darussalam Yu Hong said this yesterday in her capacity as guest of honour at a re-election ceremony for Brunei-China One Belt One Road Association President Jackson Ting for the 2022-2024 term. The official appointment letter presentation and oath-taking ceremony was held last week.

Yu Hong highlighted the importance of the One Belt One Road initiative, the Belt and Road Initiative (BRI).

“In November last year, the third symposium on the development of the BRI and the third symposium on the Belt and Road construction, were held in Beijing where President Xi Jinping delivered an important speech. Since its inception, the BRI has shown thriving vigour and vitality, benefitting the countries and people along the route. It has become the most extensive and largest international cooperation platform in the world today, bringing tangible benefits to the development of countries along the route.

“In the face of the pandemic, the BRI has shown resilience and vitality by making positive contributions to countries combatting COVID-19, stabilising the economy and promoting people’s livelihood of the countries involved. China has signed 206 cooperation documents on the joint construction development in the ‘Belt and Road’ BRI, with 140 countries and 32 international organisations. After eight years, the circle of friends of the ‘Belt and Road’ BRI has expanded, with the number of partners increasing, the quality of cooperation getting higher and the development prospects getting better.”

She pointed out that BRI flagship projects such as the Jakarta-Bandung High-Speed Railway, China-Laos Railway, Budapest-Belgrade Railway, Mombasa–Nairobi Standard Gauge Railway, Gwadar Port and Hambantota Port are projects that have brought benefits to locals. 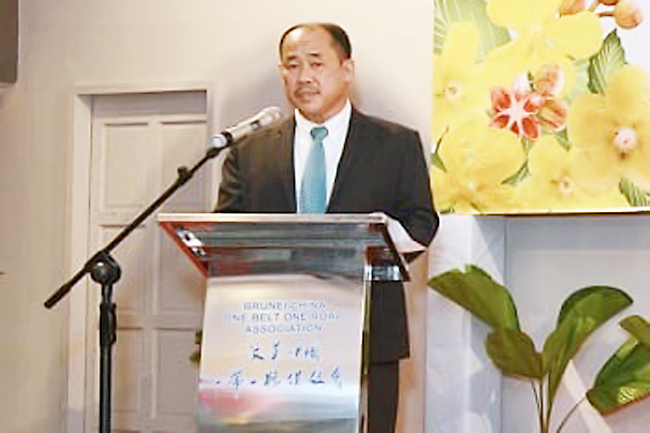 The Brunei-China One Belt One Road Association, she said, “was established in 2018. Its establishment reflects the forward-looking vision of its president, Jackson Ting, and outstanding insights of the founding directors. With the support of the governments of countries as well as enterprises and people from all walks of life, the ‘Belt and Road’ China-Brunei BRI cooperation has achieved fruitful and commendable results.”

Meanwhile, Ting highlighted that just as things were starting to move following the association’s establishment, COVID had hit. This has meant that the association has not been able to carry out much of its promised activities, he said.

He expressed hopes the association would continue to move forward and contribute to cultural exchanges, trade, investment and people-to-people exchanges between both countries.