THE WASHINGTON POST – On every trip that involves wildlife I have a secret urge to pocket the animals and take them home. I know this is wrong on so many levels, which is why, when I first read The Whispering Land, I identified with Gerald Durrell: The author is my id.

“Keeping the torch beam firmly fixed on his eyes, so that he could not see what I was doing, I gently brought up my other hand and then, with a quick movement, I threw the cloth I carried over him, and grabbed,” he wrote in his memoir, which was published in Great Britain in 1961 and in the United States (US) the following year.

Durrell had a valid reason for snatching the pygmy owl from its attic perch, one of dozens of critters captured during an eight-month expedition in South America. As I learned in the prequel, A Zoo in My Luggage, the British naturalist was building a zoo on Jersey, in the Channel Islands, and needed residents. Since he couldn’t very well order the animals from a Sears catalogue, he travelled to their habitats and scooped them up like a fashionista shopping on Rue Saint-Honoré. In his first book, he ventures to then-British Cameroons; in the second installment, he journeys to Argentina, the land of peccaries, tapirs, seriemas and other fascinating fauna.

I am fully aware that, in most cases, removing animals from their natural environment is unethical. Yet, more than 20 years after discovering The Whispering Land in a Harvard Square bookstore (I liked the cover), I remain an eager passenger on Durrell’s wild ride. For one, his excursions predate the Age of Enlightenment for wildlife protection and conservation. Two, his heart is in the right place: He dedicated his life (1925-1995) to protecting endangered animals and ensuring their future through his Jersey Zoo, which he founded in 1959, and the Durrell Wildlife Conservation Trust, which works in nearly 20 countries. And finally, he is a charming and witty fella. Imagine if Fawlty Towers had aired on Animal Planet, or if David Attenborough were Monty Python’s seventh troupe member.

Case in (third) point: After an evening spent under a Land Rover in Patagonia – always the gentleman, he had insisted that the three female members of his party sleep inside the vehicle – he awakens to find a stranger in his midst. “He wore the supercilious expression of his race, the faint aristocratic sneer, as if he knew that I had slept in my clothes for the past three nights,” he said of the bedroom-crashing guanaco. The shaggy cousin of the llama burps. “He paused for a moment, glaring at me, to make sure that his comment on my worth had made me feel properly humble.” The animal trots off, and Durrell awaits the arrival of dawn swaddled like a baby in blankets. 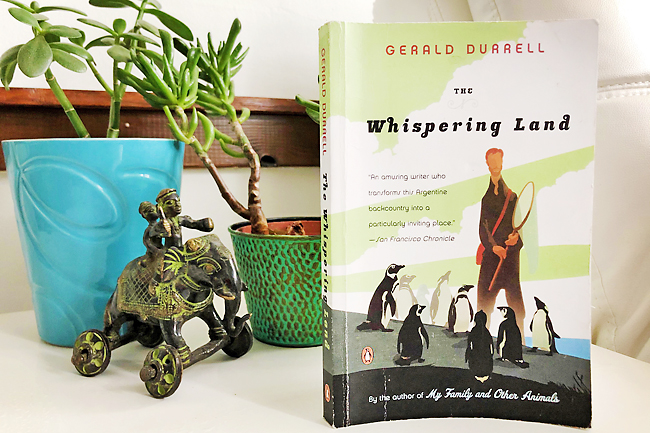 In A Zoo in My Luggage, Durrell spends most of the nearly 200 illustrated pages collecting and anthropomorphising around Bafut, a mountain kingdom in the West African country. (Ralph Thompson contributed the inky drawings for both books.) Among his finds: Cholmondeley St John, a chimp with a posh demeanour; Ticky, a black-footed mongoose; and Georgina, a baboon who runs amok in a British department store a la Curious George. In The Whispering Land, Durrell starts in Buenos Aires, swoops south to Patagonia, then boomerangs back north to Calilegua, now a national park. His story opens and closes with a bureaucratic roundelay that many travellers, including those who are not transporting traps or a puma, may find relatable.

In the first half of the book, Durrell behaves like a (mostly) typical wildlife enthusiast, observing with his eyes and keeping his grabby hands idle. (One exception: an Aesop-slow tortoise they helped cross the road by throwing him into the back of the car. They later christened him Ethelbert.) When his team locates a colony of roughly a million penguins, his excitement is palpable. “In among these craters waddled the biggest collection of penguins I had ever seen, like a sea of Pigmy headwaiters, solemnly shuffling to and fro as if suffering from fallen arches due to a lifetime of carrying overloaded trays… It was a breathtaking sight.”

After describing their arduous trek to sea, he turns his lens on a family he names the Joneses and a chick from next door who is always popping by their nest for free food. The scene plays like a sitcom. “The parent Jones, being harried by its gaping-mouthed brood, its mind fully occupied with the task of regurgitating a pint of shrimps, did not seem to notice the introduction of a third head into the general melee that was going on around it.”

On wildlife-viewing trips, I try to emulate Durrell in the field, especially his patience, curiosity and unbridled sense of wonder. This has paid off. On Sea Lion Island in the Falkland Islands, a Gentoo chick approached me and yanked on a Velcro strap on my coat. Then it regurgitated all over both of us. I was honoured.

In the Galápagos, I was swimming off a beach on San Cristóbal Island when I noticed a pair of birds darting around underwater like battling submarines. They were Galápagos penguins. I swam with them, beneath a searing sun, and gave myself heat stroke. I dragged myself onto the beach and had to drink copious amounts of coconut water to recover. I imagine Durrell would have poured himself a glass and jumped back in the water. I am clearly still a rookie.

The second half of the book focusses on rounding up animals, or “bichos” for his Jersey venue. (In A Zoo in My Luggage, he and the locals refer to the wildlife as “beef” as in “Good morning. You bring beef?”) When I first read the book, I found these anecdotes as entertaining as Doctor Dolittle’s escapades, but I didn’t pick up on the greater importance of Durrell’s work until years later. When I cracked the book open again, I was more informed about wildlife conservation issues and eco-tourism.

This knowledge helped deepen my admiration for his writings and mission. As he explains in the prologue to A Zoo in My Luggage, “To me extirpation of an animal species is a criminal offence, just as the destruction of something else that we cannot recreate or replace, such as a Rembrandt or the Acropolis, would be.” In his view, the tortoise is as sacred as, say, the Taj Mahal, a position I support. Ditto for some of his collecting practices.

To amass his animals, Durrell employs locals, providing them with another source of income. Once word gets out that a British man is interested in buying bichos, villagers start showing up at his doorstep like UPS drivers. He also buys wild animals kept as pets, such as a foul-mouthed Tucumán Amazon parrot and a maltreated ocelot in critical condition.

At his temporary digs in Calilegua, he administers a shot of penicillin, dresses the ocelot’s wound and sets out food – both reader and writer cross their fingers. “Then, while I held my breath, she leaned forward and lapped experimentally at the raw egg,” he wrote. “Within 30 seconds the plate was clean, and Luna [his guide] and I were dancing a complicated tango of delight round the patio.”

Durrell expresses a similar level of exuberance for humans. He is accompanied by an engaging cast of characters, including the aforementioned Luna, who is the Robin to his Batman, and Edna, who keeps his glass full and feeds his animals whenever he is away from the estancia. He dedicates an entire chapter to an airplane seatmate named Rosa Lillipamplia, who has a “lava-flow of chins”.

The pair bond over a Proustian remembrance of praying mantises. “So, for 10 minutes or so, we played with the insect, making it run up and down each other’s arms, and laughing immoderately, so that all the other passengers obviously doubted our sanity.” Note to post-pandemic self: Be more open to chatting with other passengers; you might meet someone who also raced hermit crabs as a child.

Durrell closes with a quote from Darwin that is surprisingly not about animals but about the generosity of strangers. He adds that the zoo is private but open to the public. “So come and see us,” he said invitingly. I will when I can, though I can’t promise that I won’t think about swiping its residents.