LONDON (AP) – West Ham slumped to a fifth straight Premier League loss and was booed off the field by the home crowd following a 2-0 defeat to Brentford yesterday.

First-half goals from Ivan Toney and Josh Dasilva inflicted another damaging loss on manager David Moyes, whose team could find itself in the relegation zone – or even last place – once the rest of the round is completed this weekend.

Brentford, meanwhile, climbed to ninth, although the win came at a cost as Toney left on a stretcher in stoppage time after landing awkwardly.

The star striker had put Brentford ahead after its first attack of the match in the 18th minute following a bright start from West Ham.

Christian Norgaard’s volley was saved by Lukasz Fabianski but the rebound fell perfectly for Toney to poke home his 13th goal of the season.

West Ham pushed forward again but Brentford doubled its lead against the run of play in the 43rd when Toney flicked on a throw-in for Dasilva to chase.

The midfielder raced past Aaron Cresswell, who had a three-yard head start, before burying his shot past Fabianski. The Hammers thought they had been handed a lifeline at the start of the second half when referee Darren England awarded a penalty after Jarrod Bowen was tripped by Ben Mee.

But a video assistant referee check showed the contact was outside the area and a free kick was given, and duly wasted by Bowen. 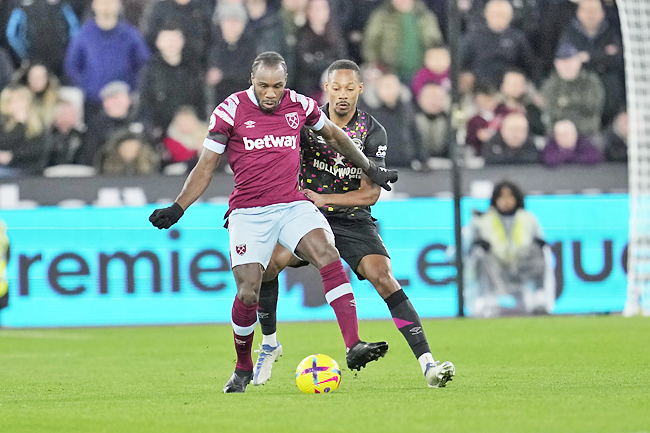