LONDON (AFP) – They have been central to working-class life in mining communities for decades but Britain’s colliery brass bands say they are now fighting to survive due to coronavirus restrictions.

With Britain again under lockdown, brass bands are struggling from the lack of opportunity to perform and drum up crucial funds, or even to practise together.

Even the most famous among them – the Grimethorpe Colliery Band, which inspired the 1996 film Brassed Off! starring Ewan McGregor – has not escaped the effects.

“The issue really is about survival at the moment,” Andrew Coe, director of the band, based in northern England and founded in 1917, told AFP.

“We were staring down the abyss of running out of money probably this summer,” he said.

Known for their colourful uniforms and fierce rivalries, colliery brass bands have faced existential threats before, not least in the year-long national miners’ strike over coal pit closures in 1984-85. 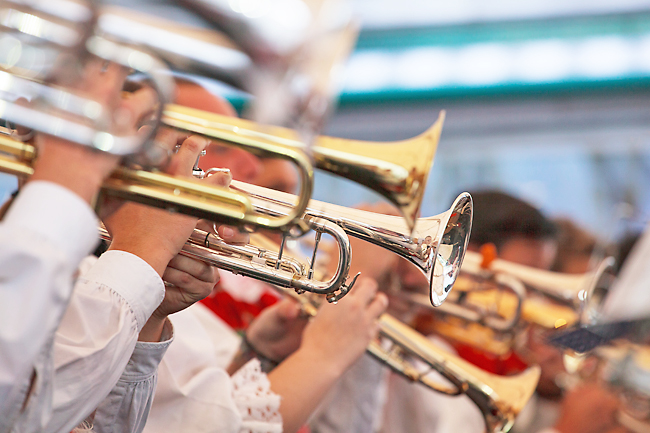 Coe said the turbulent period under then-prime minister Margaret Thatcher had been “pivotal” for the amateur bands, associated with pits.

“Under great pressure, a lot of them did disappear, sadly,” he said.

So far, over GBP140,000 has been raised under the aegis of the Brass Bands England support organisation, which represents 400 bands in England and Wales.

The organisation’s chief executive Kenny Crookston said the money had been vital to giving traditional brass bands a future.

“It really is that serious for them. They are on the brink of extinction if they don’t get some money in,” he warned. He said the funds had provided a lifeline not only to bands like Grimethorpe, which tours around the world, but smaller ones with just a handful of players.

Some top brass bands participate in international competitions and perform at high-profile venues, such as London’s Albert Hall.

But repeated changes in coronavirus restrictions have provided a series of false dawns.

“The biggest problem we have is that uncertainty,” Crookston said.

“A lot of bands went to a bit of expense and a bit of trouble to make the place spotlessly clean, put screens up, good ventilation… just to get the band back together partially,” said Crookston.

But, as rules have tightened again, including another lockdown from last month, Brass Bands England has said all practising should stop.

There is currently no indication of when practices or performances will return.

Financial difficulties aside, bands are also concerned about the pandemic’s lasting impact on local communities.

A sign welcoming visitors to the northwestern market town of Sandbach calls it “Home of the World Famous Foden’s Brass Band”.

Manager and cornet player Mark Wilkinson, who has been in the band for 29 years, said that in normal times it would be the centre of members’ social lives.

Usually the band, which dates back to 1900, would perform 30 concerts a year and rehearse every Tuesday and Thursday for two hours.

“We feel so busy, we will spend a lot of time with each other,” he said, adding that members, spouses and children were all friends with one another.

But it has been hard for the band to miss live performances, such as representing England in the European Brass Band Championships in Lithuania in May last year.

Solo trombonist and band chairman John Barber described the thrill of performing live as a “rollercoaster type of experience”.

“When there are 25 or 26 people on stage who are absolutely giving it their all, it’s not just the sheer volume and the timbre of the sound that quite literally pins you to your seat,” he said.

“There’s a collective responsibility and pride because you’re representing your band.”