CNA/NEW YORK TIMES – John Porcari is a bit of a reality TV show junkie. When he wants to work out, retired professor of sports and exercise science from the University of Wisconsin-LaCrosse Dr Porcari, goes downstairs and watches Alaska: The Last Frontier or Naked And Afraid while bouncing on a mini trampoline.

Just before speaking with The New York Times, he had completed four sets of 50 bounces while watching Discovery Channel’s Gold Rush. “I have a ski trip in January to get ready for,” he said.

The global market for trampolines is anticipated to rise to USD4.1 billion by 2027, up from an estimated USD2.9 billion in 2020.

Despite its exploding popularity – fuelled in part by the pandemic, when demand for mini trampolines skyrocketed amid gym closures – the trampoline still seems more like a kid’s toy than a legitimate workout tool.

But a growing body of recent research suggests trampolining (also known as rebounding) is an impressively effective, efficient mode of exercise.

In one small 2016 study, Dr Porcari conducted for the American Council on Exercise, 24 college students jumped on mini trampolines for six months. 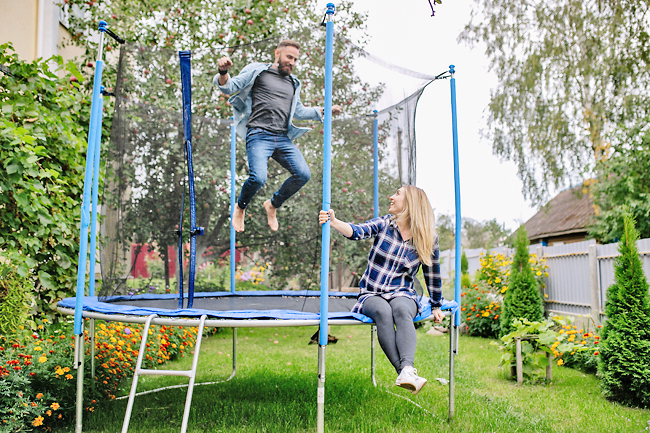 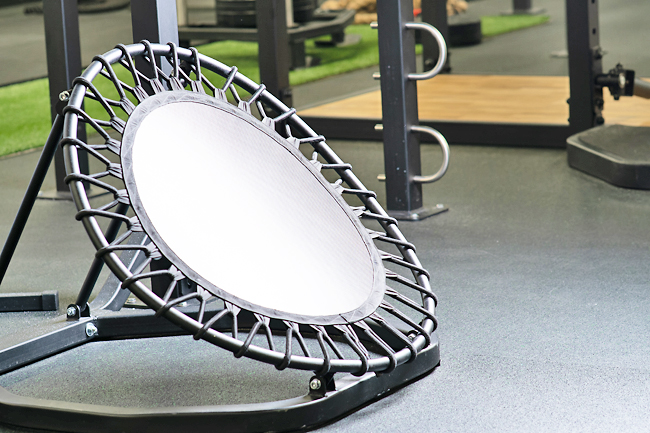 Yet, the participants rated their effort on the trampoline as lower than one would expect for that level of exertion. In short, Dr Porcari said, they were having too much fun to notice. Though there are few large, high-quality studies on trampolining, the studies that exist suggest it improves balance, cardiovascular fitness and pelvic floor musculature, all while being gentler on the joints than higher-impact forms of exercise.

Here’s what the experts say about trampoline workouts and how to get started.

In addition to being a cardiovascular workout, bouncing is “fantastic” for balance, building muscles in your feet, ankles and calves, Dr Porcari said. This is particularly important as people age and their risk of falling goes up.

Another small study, published in 2011, suggested that jumping on a mini trampoline can specifically improve dynamic balance, the type of balance required when you’re walking, climbing stairs or standing in place. In older people, improving dynamic balance can lower the risk of falls.

Dr Porcari said even a simple routine for five or 10 minutes, three days a week, alternating between jumping on one foot and two feet can help improve balance. “Because of the relatively high intensity of trampoline exercise you can get away with fewer minutes,” than, say, on the elliptical or treadmill, he said.

Trampolining may offer unique benefits for older women in particular, who are at higher risk of developing conditions like osteoporosis and urinary incontinence than men.

About 70 per cent of American women over the age of 60 suffer from some form of urinary incontinence. The largest segment, about 53.1 per cent of women in this age group in a recent study, experience involuntary loss of urine caused by physical activity (or laughing, sneezing and coughing) that increases abdominal pressure.

Some evidence suggests trampolining may preserve or strengthen the muscles that can prevent this. One small study published in 2018 suggested that the pelvic floor muscles are highly active during mini-trampoline jumping and another, not yet published, indicates that pelvic floor function can be improved by rebounding.

In that study, 37 postmenopausal women did 30-minute mini-trampoline workouts three times a week. After 12 weeks, the women had better scores on urinary incontinence and higher bone mineral density. (Their bone mineral density returned to normal when they stopped rebounding regularly.)

Graduate student at Massey University in Wellington, New Zealand Anja Fricke, and the lead author on the study, said women should start with simple jumps while holding onto a handrail if available.

Start with intervals of eight minutes of bouncing followed by two-minute breaks. To get the pelvic floor muscles particularly activated, Fricke suggested squeezing a soft gym ball or a lightweight kids’ soccer ball between the legs; then jumping by pushing off with both legs while keeping the ball in place.

“Running on a treadmill can be super hard on the joints and the knees. Doing jumps on the floor can be hard,” said personal trainer at Future in Cranberry Township, Pennsylvannia Nicole Schott, who developed trampoline classes. Rebounding “allows for you to do those higher-intensity or even more complex movements without killing your body”.

EMBRACE YOUR INNER KID – OR JUMP WITH SOME REAL ONES

Myriam Gilles, 51, has been rebounding since 2009 at a bouncing studio called The Ness in the Tribeca neighbourhood of Manhattan. The 50-minute classes blend dance choreography, hand weight exercises, sit-ups and planks, all on the trampoline.

“I bounce and I SoulCycle,” said Gilles. “They’re just gentler to the body and have a community feeling that I love.”

She said trampolining also connects her to distant memories of her childhood in Brooklyn jumping double Dutch. “I was one of those Black girls who loved to jump rope. I sometimes think that there’s something about the trampoline that reminds me of that,” she said.

Biomechanist and the interim dean for the School of Nursing and Health Studies at Monmouth University Sarah Shultz said rebounding on a large outdoor trampoline is an opportunity to connect with her own children.

“I have a great time going on it with my kids,” said Dr Shultz, who is a mother of two. “I can get out of a rough meeting, or I’ll get writer’s block trying to write an article, and I’ll go ‘Alright, kids. I’ve got five minutes. Let’s make mummy happier’.”

GET STARTED AT HOME

Most experts recommended a trampoline with a 32 inch to 48 inch jumping surface, which costs around USD50. Higher-end options can cost 10 times that and may offer a more comfortable spring-less design, removable legs for easy transport and storage and adjustable rubber cords, which make the device less noisy and lower impact (since rubber springs are quieter and spongier than their metal counterparts).

If you feel unsteady, experts recommend having a wall within arm’s reach or using walking poles planted on the floor beside the trampoline for balance. To make the workout harder, you can add wrist or ankle weights. Don’t get discouraged if it takes you awhile to master the basics, though.

“Bounce incorporates balance, cardio, coordination and strength, so there is a bit of a learning curve when you begin,” said co-founder of The Ness Colette Dong.

1. Side-to-side hops with feet together. Keep a slight bend in the knees and your feet together. Hop both feet over to the other side of the trampoline and back. Schott stressed the importance of maintaining a tight core while you do this movement, allowing the motion to come from the feet.

2. Bounce down. Start in a squat. Begin to pulse the heels down continuously into the trampoline at a rapid rate while maintaining a squat. Then, using the core, start to lift your knees in toward your centre, lifting your feet off the trampoline while keeping your body low.

“Bounce down is a simple but effective move that engages the glutes, hamstrings” and the inner muscles of your abdomen while getting the heart rate up, Dong said.

3. High knees. Keeping your knees slightly bent, lift one knee up to your chest and alternate as quickly as you can, running in place. To lower the intensity, slow the speed to a march.

4. Twist. Beginning in a squat, keep your feet slightly wider than your hips and use your obliques to twist the lower body to one side while the shoulders stay square to the front of your space.

Allow your opposite arm to swing forward as if you were rolling a bowling ball. Once your feet land facing one side, reverse the action to bring the lower body back to your starting position.

“Twists activate both your internal and external obliques, creating opposition through the torso and increasing spinal rotation,” said Dong.