THE WASHINGTON POST – The last time we watched rich boys and their toys going mano a mano was back in the aughts, when Microsoft’s Paul Allen and Oracle’s Larry Ellison tussled over who had the biggest private yacht in the world. After Allen commissioned his 416-foot superyacht Octopus, Ellison added an extension to his Rising Sun, bringing it to 452 feet in length. Size matters.

Now the billionaire battle is for space, albeit short, suborbital flights. Jeff Bezos, the richest man in the world, announced he would fly in his Blue Origin’s New Shepard spacecraft on July 20. Then Richard Branson decided that he would take an hour-long jaunt on his Virgin Galactic VSS Unity space plane nine days earlier. He came, he floated in zero gravity, he conquered.

And it had nothing, nothing to do with ego or any kind of billionaire rivalry, Branson insisted. “I know everyone expects me to say yes,” he said recently on The View. And then he felt compelled to add: “I hate the word ‘billionaire’. I started with 200 pounds.”

Now Elon Musk, founder of SpaceX, has bought a ticket on Branson’s rocket, according to news reports.

And they can afford it. These three space musketeers bring a collective net worth of almost USD400 billion to their out-of-this-world side hustles.

To their fans, the promise of expanding our reach beyond this planet is thrilling. For critics, the money poured into private vanity projects is unforgivable when there is so much to be done right here on Earth. This race has only deepened the divide between those who love to see the very rich launch into space and those who wish they would never come back. 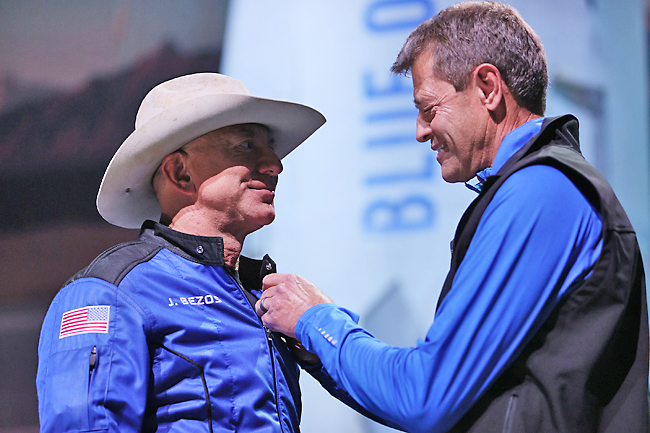 Branson, worth an estimated USD5 billion, got dragged all over social media when he mused after his flight: “Imagine a world where people of all ages, all backgrounds from anywhere, of any gender, or any ethnicity, have equal access to space. And they will in turn, I think, inspire us back here on Earth.”

Branson failed to note that a ticket on one of Galactic’s flights currently goes for USD250,000. More than 600 people have already signed up.

What is a mere mortal to make of billionaires in space? It depends on how you feel about the Montgolfier brothers, the Wright brothers, NASA, the moon landing, Star Trek, Star Wars, Buzz Lightyear, income equality, tax breaks for the very rich, Space Force and The Right Stuff.

But here’s the thing about billionaires: They don’t really care what we think.

Two years ago, business writer Geoffrey James identified key beliefs of the super-rich in his story How to Think Like a Billionaire for Inc.com.

Billionaires are less concerned about breaking rules, partially because they can buy their way out of trouble but more because they believe every successful entrepreneur ignores conventional wisdom and how they’re perceived in the moment. Their focus is almost always on the future. And what says “future” more than rocket science?

Branson is the jokester who made a fortune in music, media, trains, planes and, he hopes, space travel with Virgin Galactic, which he founded in 2004. He wants to see people in space because – well, it’s fun and everyone should get the chance to experience it. The goal is a company that will transport passengers to floating hotels or labs, or on supersonic transcontinental flights.

Bezos, by contrast, has had a lifelong fascination with space. “I never want to dismiss the role that ego, vanity or competitive instincts are playing all these things,” said Brad Stone, author of Amazon Unbound: Jeff Bezos and the Invention of a Global Empire, but Bezos grew up reading science fiction and watching space launches with his grandfather, who worked at the Atomic Energy Commission. In his high school valedictorian speech, the future billionaire outlined his vision: “Space: the final frontier. Meet me there.”

His admiration for Star Trek’s Captain Picard is well known, but he was more influenced by physicist Gerard O’Neill, who foresaw space stations orbiting Earth to house humans as life on Earth becomes untenable. Bezos “is pursuing this as his personal passion, not just to go to space himself, but to build successful businesses in space just like he built a successful business on the Internet,” said Stone.

Bezos – who founded Amazon and owns The Washington Post – was the first of the three to found a rocket company (Blue Origin in 2000). He picked his launch date, July 20, because it’s the day in 1969 when Neil Armstrong and Buzz Aldrin first stepped on the moon.

Stone is still a little surprised Bezos is taking the risk. “It’s a dramatic gesture and symbolises the level of belief he has in that team and in the rocket,” he said. “But it’s kind of breathtaking that someone who’s worth USD200 billion is making himself a guinea pig.”

It may be Musk who ultimately wins the billionaire space race.

“Elon started SpaceX from a very different place than Branson and Bezos and their respective aerospace companies,” said Ashlee Vance, author of Elon Musk: Tesla, SpaceX, and the Quest for a Fantastic Future. “He had zero interest in space tourism. His interest was always more around deeper exploration of the solar system.” Musk feels, the author added, “like the human species could be wiped out and that we need a backup plan on Mars or somewhere else”. Bezos shares the same worries but focusses on infrastructure orbiting Earth.

SpaceX – started in 2002, when Musk was worth only USD180 million – is a successful commercial business with more than 100 rocket launches, astronauts sent to the International Space Station (ISS), and NASA and military contracts. By 2050, he’d like to create a colony on Mars.

Musk is game to join a Mars mission when the technology can get him there safely. “I’ve said I want to die on Mars,” he explained in 2013. “Just not on impact.”

Famed astrophysicist Neil deGrasse Tyson is supportive of anything that gets people excited about the cosmos. But he also believes that governments are better suited for long-term exploration, priorities and investment.

“Private enterprise will never lead a space frontier,” Tyson said in a 2015 interview with BGR. “It’s expensive. It’s dangerous. You have uncertainty and risks, because you’re dealing with things that haven’t been done before.”

Los Angeles Times columnist Michael Hiltzik was more blunt earlier this month: “The competition to be the first billionaire in space should mark a milestone in the towering vanity of the wealthy,” he wrote. “Let’s promptly dispense with the notion that any of these flights will add anything to our scientific knowledge, unless it’s the establishment of a new metric for how long it takes for money to burn a hole in your pocket when you have more than you could possibly need.”

Hiltzik, a self-described science and space geek, argues that Bezos and Musk are misguided in focussing on Plan B for a broken Earth. “Answers to global warming and disease are still much more accessible than fleeing Earth for space. The dream of interplanetary travel and colonisation is the dream of schoolchildren, and it’s time that the billionaires grew up.”

Still, if billionaires want to spend their fortunes blasting off into space, is it anyone else’s business? American conservatives and libertarians say no, arguing that private companies create jobs and eliminate wasteful government spending. Liberals are angry and disappointed that billionaires have not spent more of their vast fortunes on terrestrial problems: Hunger, healthcare, education, and much more.

“I 100 per cent agree that people who are in positions of wealth should spend most of their money, 90 per cent or more of their money, trying to tackle these issues,” Branson told the Today show recently, “but we should also create new industries that can create 800 engineers, and scientists who can create wonderful things that can make space accessible at a fraction of the environmental cost that it’s been in the past.”

In a statement, Virgin Galactic said such accessibility “will be an overall benefit to society. The experience of space travel can hopefully lead to a changed perspective that will benefit the earth”. Blue Origin and SpaceX did not respond to questions about their founders’ investment in space vs charitable giving.

Senator Bernie Sanders tweeted a version of what hundreds more expressed: “Here on Earth, in the richest country on the planet, half our people live paycheque to paycheque, people are struggling to feed themselves, struggling to see a doctor – but hey, the richest guys in the world are off in outer space! Yes. It’s time to tax the billionaires.”

The billions that Bezos and Musk pour into space might, under a different tax code, have gone into the federal coffers. Personally, Bezos paid about one per cent in taxes from 2014 to 2018, and Musk paid just over three per cent, according to a study released by ProPublica in June.

And if you think critics – or anything else – stopped Bezos from strapping onto a rocket into space on Tuesday, you don’t know jack.

“Bezos has this conviction that when you do big things, people aren’t going to understand it and you’ve got to remain firm to your long-term vision,” said Stone. “And he believes this is a form of philanthropy; that by building this company and helping to usher in, like, a new Space Age, he will be helping humanity generations from now.”

To infinity and beyond! Or maybe just a quick spin above Earth.