Those have all been hallmarks of José Mourinho’s career. Rarely, though, has the outspoken Portuguese coach been so publicly upset with one of his own players as he was following Roma’s 1-1 draw at Sassuolo.

Without naming the player, Mourinho unleashed a vicious tirade aimed at left back Rick Karsdorp, who was partly responsible for allowing Sassuolo a late equaliser five minutes after the Giallorossi had gone ahead.

“We played a good match but our effort was betrayed by a player with an unprofessional attitude,” Mourinho said. “I used 16 players and I liked the attitude that 15 had, whereas I didn’t like the attitude of one player.

“I won’t tell you who it is but I’ve already said it in the changing room and that’s not something that I do often.” Mourinho also said he was “betrayed” by his Chelsea players days before his second term at the London club ended with him being fired in 2015. 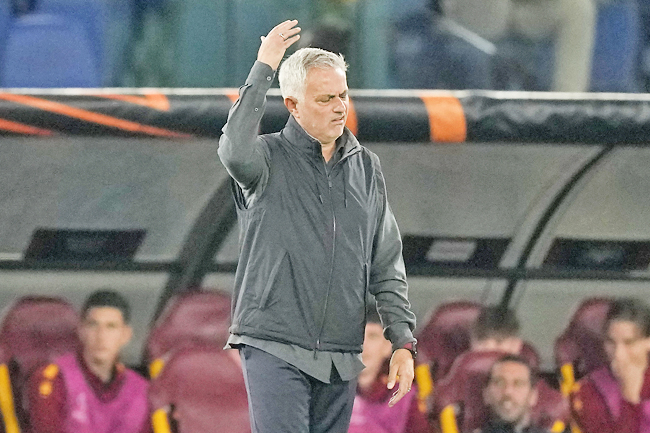 Karsdorp, who came on for the final 25 minutes on Wednesday, apparently did not appreciate starting the game on the bench. The Dutch left back also went straight into the locker room after he was substituted in the second half of the derby loss to Lazio on Sunday – then came back out to the bench with ice.

With key acquisitions Paulo Dybala and Georginio Wijnaldum out injured, Roma has struggled to meet big preseason expectations following its Conference League title and is in sixth place in Serie A.

Besides Lazio, Roma also lost to Napoli and Atalanta at home in big matches; and finished second in its Europa League group, three points behind Real Betis, meaning the Giallorossi will face a playoff in February against Champions League dropout Salzburg to stay in the competition.