THE WASHINGTON POST – As a semblance of late-pandemic “normal” life blossoms, angst and turmoil – and sometimes justice – still reign in five of June’s best mysteries and thrillers. One even features a pandemic that makes covid-19 look like a month in the country.

Taylor Adams’ fourth stand-alone thriller moves at about 150 miles per hour until its closing scene, which is still and tender.

Lena Nguyen, 24, drives from Seattle to rural Montana, the site of where her identical twin sister, Cambry, is thought to have died by suicide by leaping from a high bridge. Lena, the twin who “went to college”, suspects that Cambry, the twin who “went renegade”, was actually murdered by the cop who found her body. Trying to learn the truth and assuage her guilt for not being a more understanding sister, Lena finds herself in mortal danger in a novel that’s part action flick and part affecting rumination on moral responsibility
within families.

I Don’t Forgive You by Aggie Blum Thompson

Photographer and young mother Allie Ross’s mostly good life with her lawyer husband, Mark, and their sweet, funny five-year-old son, Cole, comes crashing down when Allie is accused of murdering an obnoxious clod who had tried to sexually assault her at a neighbourhood potluck. Among the several villains in Aggie Blum Thompson’s first novel, a perceptive and beautifully assured piece of domestic noir, is social media. 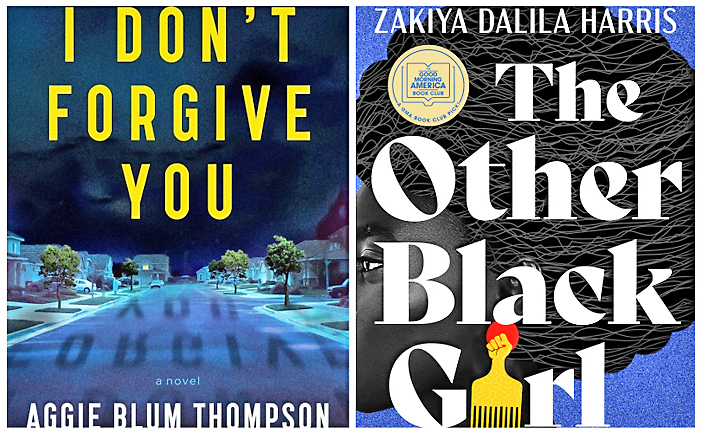 The Other Black Girl by Zakiya Dalila Harris

Zakiya Dalila Harris’ first novel about office politics and race in the New York publishing world is initially satirical and then spectacularly creepy. Brainy, socially alert editorial assistant Nella Rogers wonders if an ominous note she finds on her desk at Wagner Books, “(BEGIN)Leave Wagner. Now(END)”, was left by a racist or by new hire, Hazel-Mae McCall, suddenly Wagner’s “other Black girl”, who “dripped Harlem like Spike drips Brooklyn”.

Nella’s struggle to form a sturdier, more clearheaded Black identity for herself is at the centre of this unique thriller that has echoes of both Jordan Peele and, in the end, George Orwell.

Resistance: A Graphic Novel by Val McDermid and Kathryn Briggs

The origins of this grab-you-by-the-throat medical thriller predate covid-19 by three years. Resistance started out in 2017 as a BBC Radio serial written by the estimable Val McDermid, author of the Tony Hill and Karen Pirie mysteries, among others. Now McDermid has joined with talented American graphic novelist Kathryn Briggs to retell the saga of an apocalyptic pandemic triggered by the massive overuse of antibiotics in farming and elsewhere.

The outbreak begins with the portable toilets overflowing at an English music festival and ends with the Earth’s population reduced to about two million. Implausible? The authors’ research said nuh-uh.