AP – As Everton was closing out its latest win in the Premier League, it probably wasn’t lost on manager Rafa Benitez (AP; pic below) that his three-man forward line on the field at the time cost a combined total of barely USD2 million.

The largesse of the Premier League was in full force again this summer – clubs in England’s top division spent a total of USD1.5 billion during the transfer window – yet, at Goodison Park, there was a reversal of the extravagant approach that had marked the last few years.

Benitez joined the club in June to a backdrop of protests by some fans because of his strong past links to Liverpool – Everton’s local rival across Stanley Park – but also to the kind of belt-tightening not previously seen at the club in the five-and-a-half years under majority shareholder Farhad Moshiri.

Under the circumstances, things could hardly be going any better.

After four rounds in the Premier League, no team has more points than Everton’s 10, with Manchester United, Chelsea and Liverpool on the same number.

There’s also been a win in the English League Cup. 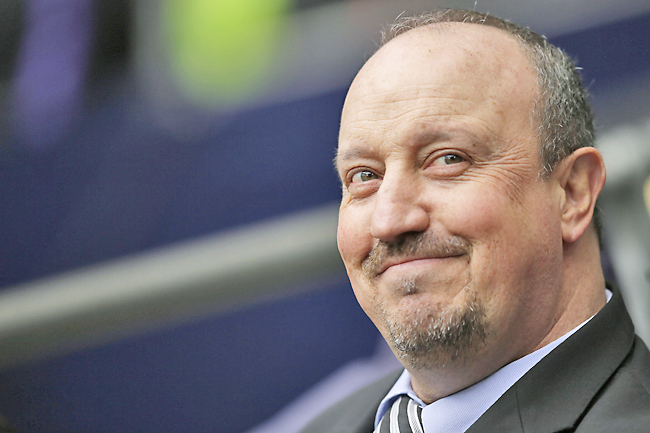 Anti-Benitez sentiment among some in the fan base may never disappear but, for the moment, it seems to have been silenced.

A win at Aston Villa could even leave Everton atop the standings, even if just for one night.

Even Benitez’s biggest critics will accept the progress made by the Spanish coach since his return to Merseyside.

Two of Everton’s three wins in the league have involved coming from behind – both finished 3-1, against Southampton and most recently Burnley on Monday – to highlight the mental toughness Benitez has already instilled and which wasn’t always there under previous managers.

Indeed, if it wasn’t for a late equaliser in a 2-2 draw at Leeds, Everton would be on maximum points. “It has been very close to perfection,” Benitez said on Thursday.

All this done on a budget, too. While Everton’s four other permanent managers hired in Moshiri’s reign – Ronald Koeman, Sam Allardyce, Marco Silva and Carlo Ancelotti – spent a staggering USD750 million combined on players, Benitez was told when he arrived that similar funds just weren’t available because of the effects of the pandemic and the ongoing development of the club’s new stadium by Liverpool’s waterfront, which is costing a reported USD700 million and is hoped to be completed by the start of the 2024-25 season.

That meant shopping for bargains in the most recent transfer market, and Everton picked up four players on free transfers – winger Andros Townsend, striker Salomon Rondon and two backup goalkeepers – as well as another winger in Demarai Gray for USD2.35 million.

Gray and Townsend have been revelations so far, with both scoring in the win over Burnley and being key members of a tactical shake-up that has seen a more direct approach in an effort to get more crosses into striker Dominic Calvert-Lewin, who is among the league’s best players in the air.

With Calvert-Lewin missing the Burnley game through injury and Brazil forward Richarlison having been substituted, Everton went into the final stages with Gray and Townsend either side of Rondon, who came on for his debut.

After a weekend that saw strikers Cristiano Ronaldo and Romelu Lukaku star for Manchester United and Chelsea, respectively – scoring twice each – and Liverpool’s dynamic forward three overwhelming Leeds, Everton’s attacking options looked meager compared to the teams it is mixing with.

But, as he often does, Benitez is getting the most out of what he has and has made some in-game tactical tweaks – like switching from a three-man defence to a 4-3-3 during the Burnley game – that highlighted his coaching nous.

He might yet be able to get Everton’s fans onside.

“At the beginning, it was controversial, but I think the fans appreciate we are trying to do our best – me, the players and the staff,” Benitez said.

For Benitez, all Everton fans want is “a team that gives everything.

“And they can see that every day,” he said earlier this week. “Players, who last year perhaps weren’t performing at the level, now are giving everything and the fans appreciate that.”

It’s therefore no surprise that Colombia playmaker James Rodriguez, a talented player whose work rate and attitude is sometimes questioned, has yet to play a minute under Benitez.

Nor is the fact that Abdoulaye Doucoure, a giant, marauding midfielder in the mold of Yaya Toure, has been one of Everton’s best players so far, breaking into the box regularly and both setting up and scoring goals.

There has been only one clean sheet so far, but expect them to come under a pragmatist like Benitez. These are early days, but maybe Benitez was the right appointment after all.