BRUSSELS (AFP) – A Belgian police officer was killed in a knife attack in Brussels on Thursday, authorities said, as anti-terror prosecutors took charge of the inquiry.

Spokesman for the prosecutor’s office Eric Van Duyse told AFP that federal investigators had taken charge “because there is suspicion of a terrorist motive, which will be confirmed or disproved”.

Local media reported that an assailant stabbed two officers in the area close to the city’s Brussels-North railway station at around 1815GMT before being shot in the legs and abdomen by another police patrol arriving at the scene.

One of the police officers reportedly died of his injuries after being stabbed in the neck and both the other wounded officer and the perpetrator were hospitalised.

A local resident told AFP that he had heard “five or six shots” fired shortly after the time of the attack.

“Our police officers risk their lives every day to ensure the safety of our citizens. Today’s drama demonstrates this once again,” Belgian Prime Minister Alexander De Croo wrote. 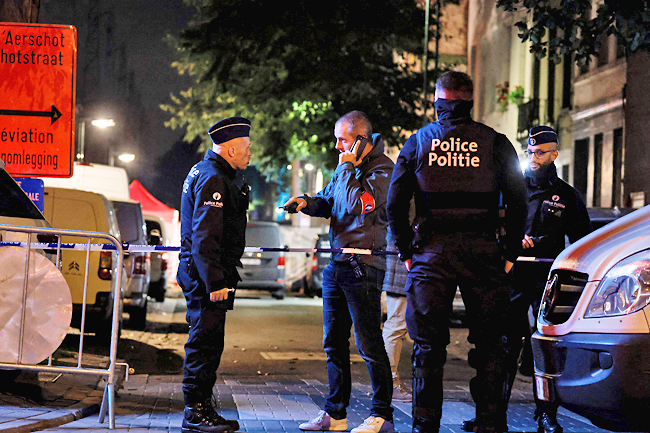 “My thoughts are with the family and friends of the deceased officer. My sincere hope is that his hospitalised colleague will be well,” he posted on social media.

Several news outlets reported, without giving their source, that the assailant had earlier on Thursday gone into a police station in the city to warn that he would try to attack police, but he was not detained.

Interior Minister Annelies Verlinden said that she was “closely monitoring the situation” and was in contact with police and local authorities.

“This violence against our people is unacceptable,” she said.

Justice Minister Vincent Van Quickenborne said “police and federal prosecutors are doing what they have to to investigate these horrific acts”.

Brussels is currently holding the trial of those accused of involvement in the 2016 Islamic State group attacks that killed 32 people at the city’s main airport and in a crowded metro station.

The trial is the largest ever staged in front of a Belgian jury, with 960 civil plaintiffs represented and the sprawling former headquarters of the NATO military alliance converted into a high-security court complex on the edge of the city.

Between 2016 and 2018 Belgium witnessed several fatal extremist terror attacks against the police or military.

The last attack classified as “terrorist” took place in the city of Liege in May 2018, when a radicalised attacker shot dead two policewomen and a student before being gunned down by officers.